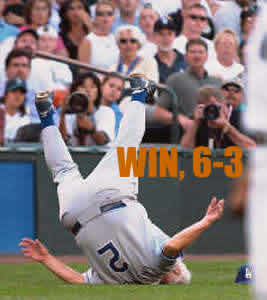 Now spotted in the wild: The elusive Mets home winning streak. Take pictures, they tend not to stick around.

On a night when CitiField managed to sound like CitiField again--Mets fans not outshouted by Giants partisans or screeching rhesus monkeys--the Dodgers scored first on a trio of singles in the top of the first, the last one just eluding Carlos Beltran's glove and bringing home Jerry Sands. Amidst the rally, Andre Ethier opted to not prolong the drama and singled in his first at bat, extending his hitting streak to 30 games. Niese labored through that inning, tossing over 30 pitches in the effort, but managed to limit the damage to one run.

The Mets proceeded to tie it up in the bottom half on a Jose Reyes leadoff triple (the first of two three-baggers on the night) and a Beltran sac fly. The Dodgers retook the lead in the top of the second on a homer from old friend Rod Barajas, and Ike Davis responded with a solo blast off the Pepsi Porch to tie the game at 2.

Both starters, Niese and Hiroki Kuroda, then settled in for a few quiet innings. Kuroda in particular looked tough early on in this game, while Niese danced between the raindrops all night. The Dodgers retook the lead in the top of the fifth after he committed the cardinal sin of walking Jamey Carroll, who eventually came around to score on a bases-loaded groundout from Juan Uribe (a ball that just missed Niese's glove, in which case it might have been an inning-ending double play).

The Mets could not come up with their next counterpunch until the bottom of the sixth. Beltran snuck a one-out double down the first base line, and after Jason Bay ground out, the Dodgers elected to fill an empty first base by intentionally walking Ike Davis and taking their chances with young Jason Pridie. It was a totally sensible, justifiable move, and one that was foiled when Pridie belted a three-run homer to put the Mets up 5-3. And it was no cheapie, either (not that CitiField has many of those), landing in the back of the bullpen in right center. It may not be the biggest hit of the Mets' season so far, but it has to be the most unlikely.

The Mets stretched their lead to 6-3 when Reyes walked to lead off the bottom of the seventh, stole second, and scored on a Jason Bay single after another intentional walk (this one to Beltran) backfired on the Dodgers. Were it not for Pridie's heroics, Reyes would be the story of this game. Two triples, a double, a walk, a stolen base, and two runs scored--the prototypical Reyes performance. It'd be nice if such a night could inspire more writers to discuss how great Reyes is rather than what teams he might be traded to according to "major league sources".

The Dodgers had no response the rest of the way. All Mets relievers--Ryota Igarashi, Taylor Buchholz, Jason Isringhausen, and Francisco Rodriguez--allowed at least one baserunner in their appearances, but no runs. Despite throwing 40+ pitches in Thursday's nailbiting "save", K-Rod was permitted to pitch in the ninth and worked around a leadoff single to seal the win. It seemed a bit ridiculous to use Frankie is such a spot, a textbook example of managing to the save rule. But since neither his arm nor the game blew up, no harm, no foul.

Tonight's win not only gives the Mets a modest two-game winning streak, but it also gives me my first win while recapping, after starting the year 0-7. I was beginning to think I'd turn into the Anthony Young of Amazin Avenue. With one win under my belt, I now feel more like the Jeff Innis of Amazin Avenue.

That concludes this edition of Obscure Early 1990s Mets Theater. 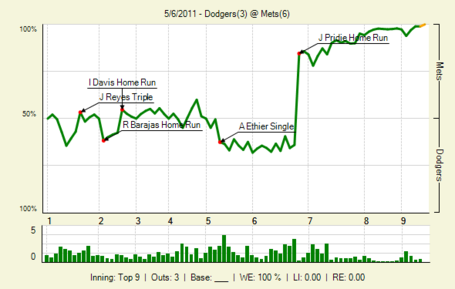 Nice job by HoyaDestroya85; his effort in the game thread embiggens us all.