Two streaks came to a head Saturday night as Andre Ethier took his 31-game hitting streak into town to take on the Mets in the midst of a modest two-game winning streak. Thankfully, the shorter streak prevailed as the Mets rode an eighth-inning Justin Turner single just-in time to a 4-2 victory over the Dodgers.

Despite not having his best stuff, or his stuff just not being the best, emergency starter Dillon Gee played escape artist all night. He had some mitigating circumstances, as Chris Young was scratched just before the game because he couldn't get loose. But Gee isn't going to blow batters away and is pitching with a partially torn labrum. Whatever the G-Unit can do for the Mets has to be counted as a positive, even if what he can do is tie major league records for stranded base runners in the first two innings.

He seemed to get going as the game went on. In the third, he even struck out Jay Gibbons and Juan Uribe consecutively, but that accomplishment would be more impressive if it wasn't Jay Gibbons and Juan Uribe. Juan Uribe proved he was Juan Uribe by striking out a second time (in the fifth), and that time even on a 92-MPH Gee fastball at the eyes. As an aside, Juan Uribe once again proved he was Juan Uribe by striking out swinging a third time against Ryota Igarashi in the seventh. To be fair, he just had too many existential thoughts in his head to concentrate.

Eventually came some walks (three on the night) and singles (five), but Gee always had his curve and change to rely on when he wanted soft contact. Those off-speeders got him just enough groundballs at the right moments to succeed, even if his batted ball profile skewed fly ball as a whole. He ended the fourth and fifth with infield contact, stranding runners and walking the tightrope. But! He was 'pressed into service' and overcame some troublesome innings, and his only big flaw was giving up a home run down the line to waiver wire scrap-heap acquisition Dioner Navarro. He left the game tied two-all in the sixth and should have had his head held high.

Gee-zy was about the same as Jon Garland, who walked three and struck out three as well. They both even gave up seven hits. The Dodgers' righty seems more and more to be a product of his home parks. This might be true, to the extent that even when he came to a park that seems to play like his home park, he still couldn't manage much. He did strand some baserunners when he struck out Jason Bay in the first and got him to ground out in the fifth. This is Jason Bay, who has been on the field for like, all of the Mets wins or something. Never mind, Garland mostly nibbled and put balls in play with fingers crossed.

In our most honest of hearts, though, we might admit that we'd be happy with a Garland-esque career outcome for Dillon Gee, no? Presented without further comment, as it's perhaps a discussion for another time.

David Wright - a cornerstone enduring all too many trade rumors - and Carlos Beltran - an aging piece with an expiring contract that should be the inspiration of more trade rumors - didn't do that much tonight. Beltran did manage a two-out four-hopper through the middle of the infield in the third and a walk in the sixth. And of course, we have to point out that David Wright's double in the sixth was his first hit of the series. My word!

Instead, it was Jose Reyes, the expiring contract and cornerstone piece that has so many fans confounded, that drove in a run and hit a line drive single up the middle in the eighth. It was also Reyes that got caught in a pickle shortly thereafter in the eighth, and also Reyes that fell asleep at first base and was picked off earlier in the game. Let's not say that is a microcosm of his career - sure he's made some boneheaded plays but that doesn't mean he's a boneheaded player.

Jason Pridie had some serious pride, though, and might be the player of the game. He had a double, two singles and a run scored, and yet let's hope that won't spawn stories about Angel Pagan being expendable. The biggest play of the night might have been a poor choice - he bunted with an out and Jason Bay on first in the eighth inning, and Hong-Chih Kuo threw the ball away to set up the big moment. This performance, in the face of Willie Harris taking a called strike three with Pridie on second base and two outs in the sixth, does put him squarely ahead in the fifth-outfielder race as a roster crunch approaches, however. At least for today. 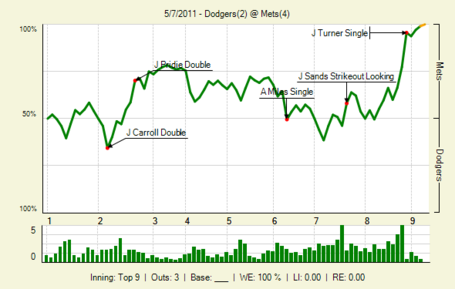