Coming into the weekend, the Mets knew the most daunting task for their hitters would be facing Clayton Kershaw this afternoon. After beating the Dodgers on Friday and Saturday, a win against Kershaw would have been a bonus, but the loss is not the end of the world.

The Mets had Kershaw on the ropes in the first inning, and lefty-killer Ronny Paulino drove in Justin Turner with a two-out single. Unfortunately, Ike Davis followed up by striking out looking, stranding Paulino on first base and David Wright on third.

R.A. Dickey had another so-so outing, allowing four runs in seven innings of work. The Mets gave the Dodgers their first run of the afternoon when Kershaw was hit by a pitch leading off the third inning and advanced to second base on a passed ball. Kershaw came around to score a couple batters later on an Aaron Miles single. The Dodgers' second run came on a weak groundout by Rod Barajas in the fourth inning.

The Dodgers threatened to blow the doors off the game in the fifth inning, but with the bases loaded and nobody out, Matt Kemp grounded into a 1-2-3 double play and "major league baseball player" Juan Uribe grounded out to end the inning. Dickey didn't allow another run until the seventh inning, but with a man on, he floated a pitch to Andre Ethier, who lined a home run over the right field fence to give the Dodgers a 4-1 lead.

The Mets threatened to come back in the bottom of the inning. With the bases loaded and two outs, Kershaw was replaced by Kenley Jansen, who got Jason Bay to fly out to left field to end the inning. It's worth noting that Chin-Lung Hu made an inexplicable pinch-hitting appearance earlier in the inning and was Kershaw's easiest strikeout of the day.

Mike O'Connor pitched the eighth and ninth innigs in relief of Dickey and retired all six batters he faced. Unfortunately, the Mets went down in order against Matt Guerrier in the eighth inning, and despite a run-scoring triple by Jose Reyes off Vicente Padilla, the Mets couldn't muster up a comeback in the ninth inning.

The Mets begin a six-game road trip tomorrow and play the Colorado Rockies at 8:40 pm. Chris Capuano gets the start for the Mets, and Jhoulys Chacin will start for the Rockies. 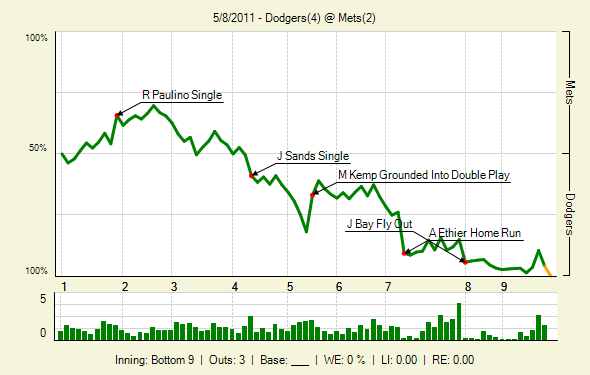