Share All sharing options for: Why Must Bad Hitters Always Bat Second?

There are plenty of things managers do which annoy us to no end — bunting with position players (particularly those with little or no previous bunting experience), questionable bullpen management, eyebrow-raising lineup construction — but one facet of lineup assembly has caught my eye (and my ire) of late with respect to Terry Collins and his in-game strategy. But first, take a look at these two lists of players:

Last year, Jerry Manuel used poor-hitting second basemen in the lineup's two-hole so often that any casual observer might reasonably have guessed that doing so was either a specific baseball rule or else some agreed-upon convention that big league managers adopted at a national managers conference decades ago. Luis Castillo batted second 49 times. Alex Cora did so 21 times. Ruben Tejada and Luis Hernandez made four starts apiece there. In half of the team's games, replacement-level detritus was given nearly as many plate appearances (per game) as Jose Reyes and more plate appearances than anyone else in the lineup.

This practice of inserting whoever happens to be available as the lineup bridge between a bona fide leadoff man and the heart of the lineup is hardly the exclusive domain of Manuel, and the scope of it clearly isn't limited to employing second basemen in that role. Collins has already used Chin-lung Hu, Willie Harris, and Justin Turner in the two-hole, with Daniel Murphy and his .312 on-base percentage getting the bulk of the opportunities while Angel Pagan has been on the disabled list.

While lineup optimization isn't that important, it's still kind of important, and it's often just the tip of the tactical mismanagement iceberg — slapdash lineup construction is usually accompanied by other dubious strategies. Baseball Musings has a neat lineup tool with which you can simulate the likely number of runs scored by a team using whatever assorted batting orders you can dream up. So here's the first lineup I tried: 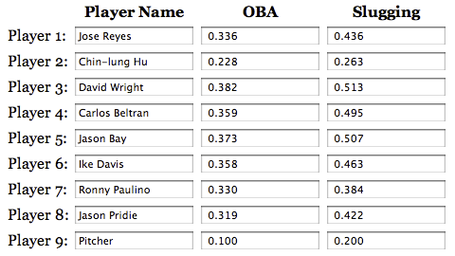 Essentially, the Mets' starting lineup with Hu batting second. Jason Pridie's stats are his career minor league numbers because his major league experience is too limited and too heavily influenced by the three home runs he has hit this season. Hu's numbers are from his 211 big league plate appearances. This lineup could be expected to score 4.156 runs against an average pitching staff. Now if we rejigger things just a tad, moving Hu to the eighth spot and shifting everyone else up, here's what we get: 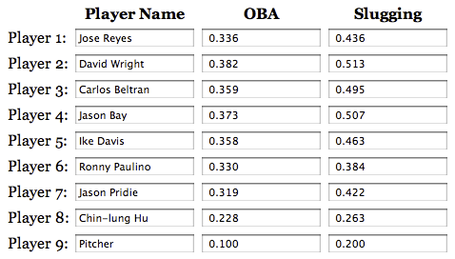 This lineup registers 4.363 runs per game, or more than .2 runs more per game than the Collins lineup. A fifth of a run in one game isn't anything to work oneself up over, but extrapolate that to a full season and you start talking about a significant difference. Like 30+ runs, which is something on the order of three wins over 162 games. That's a potentially meaningful run disparity for a decision that is made so cavalierly by so many managers, so why is it made so often and with such little (apparent) regard to optimizing run-scoring? There are a couple of prevailing theories.

So we're left with what we had before: banging our heads against the wall because there's simply no good reason not to give your best hitters more at-bats than your worst hitters, yet managers — specifically Terry Collins, the one manager whose decisions we actually care about — continue to behave as if those reasons not only exist, but are so patently obvious as to not require any elucidation whatsoever.