What is his path to the big leagues at this point? Where does he fit in the organization's depth chart considering Nieuwenhuis' hot start and Duda's performance?

Good question as this is one of the more interesting storylines within the Mets farm system in 2011.

As we all know, from his signing with the Mets back in 2005 as a 16-year old Martinez was considered a top prospect, a potential five-tool center fielder whose incredibly advanced bat translated into an impact contributor at the major league level. Scouts from dozens of organizations drooled over his potential; one Red Sox scout even likened Martinez to 'a young Ted Williams'. Wow, hyperbole much? For all the 'teenage-hitting machine' chatter, how that one never got blown up is beyond me.

Looking back now, it's almost laughable how poorly Omar Minaya handled this boon. Rather than prudently waiting to discount a potential 192-ab hot streak, he giddily shoved FMart up to Hi-A where he would flounder against players anywhere from three to six years his senior. This type of irresponsibly dumb behavior would be an ongoing hindrance in Fernando's young career. I won't go into each individual aggressive promotion transgression but for a brief synposis of Omar's handling of Martinez, watch this video.

Further excacerbating the issue has been Fernando's seeming inability to stay on the field. No need to re-hash old news but again, if you're a visual learner picture the Operation guy and that's pretty much it. 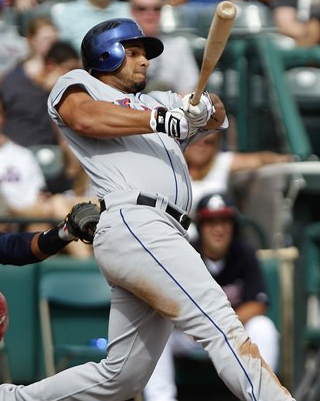 But getting back to the question, in terms of his standing among the growing crop of talented Mets OF prospects for the first time in his career Martinez is suddenly in danger of falling behind on the depth charts. Both of the names you mentioned, Kirk Nieuwenhuis and Lucas Duda, have done enough at Triple-A -- Duda in '10 and Kirk in '11 -- to at the very least put the trio on relatively equal footing; each is a top ten prospect in the system.

And so now, with Pagan under contract through next season and Bay locked in left, who gets the starting RF gig once Beltran is out?. There's a good chance that all three players will get major league reps this summer -- pending a Beltran trade -- and the starting job come 2012 will depend almost completely on who performs late this summer and then next spring. Though thanks to their similar profiles, I wouldn't be surprised to see one of Martinez or Duda shipped out by next season.

But the slight advantage that Fernando does have is that he's the closest to the 25-man roster -- as evidenced by the fact that he was just on it. Ironically, Martinez is the healthiest of the three, with Kirk currently recovering from a shoulder strain and Duda just recently returning from a back issue.

Thus, all things being equal he'll likely get the next shot and it's not crazy to think that he could grab the role by the horns. While he might not always hit for a ton of average and his plate discipline leaves much to be desired, he could easily profile as a lefty slugging right fielder in the mold of a Jason Kubel.

However, if Nieuwenhuis continues his stellar 2011 or the club just needs a center fielder and Kirk gets the job, or Duda comes back strong like he has shown he can and mashes his way into the starting lineup, expect to see FMart in a role similar to his last cup of coffee. A spot starter against righties who also provides healthy power off the bench. Not quite Ted Williams but he'll certainly bring value to the club, given that he stays healthy.