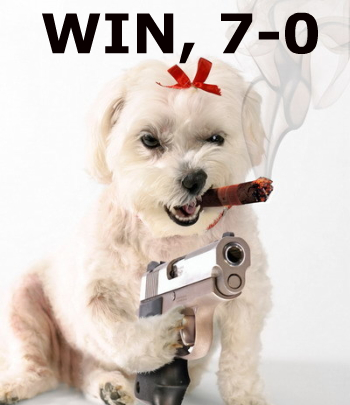 This game was strictly a pitchers' affair early on, as Kevin Correia was perfect through 4⅔ innings before Jason Bay's two-out single in the fifth. Notwithstanding Bay's surprising two-game hitting streak, Correia and Chris Capuano kept each other's offense merely theoretical for the game's first six innings before the Mets broke through with a confusing and controversial run in the seventh.

Carlos Beltran selfishly flied out to lead off the inning, but Daniel Murphy singled to center and Angel Pagan did likewise, sending Murphy to third and putting runners on the corners with just one out. Local pariah Bay ran the count to 3-1 before hitting an apparent sacrifice fly to center, though the SNY production crew was too busy following Murphy's celebratory plate-crossing to notice that the Pirates had appealed the play successfully. Double play, no run, inning over.

Or so we thought. Instant replays showed Murphy tagging from third no sooner than Bay's fly ball landed in Andrew McCutchen's mitt, and calls for robot umpires rang out on the Twitter. While that sentiment still holds, the Pirates had actually appealed the play at second base—not third—charging Pagan with not having re-tagged second on his way back to first. It remained an inning-ending double-play, but Murphy's run counted and the Mets held a slender 1-0 lead.

Capuano easily dispatched the Pirates in the bottom of the seventh, though the second controversial play of the game earned manager Clint Hurdle an early exit. Lyle Overbay led off the inning by taking a 3-1 offering from Capuano into deep center, where Pagan seemed to grab it cleanly as his body slammed into the wall. Hurdle contended that Pagan had trapped the ball against the wall—or that the ball had bounced off the wall and into Pagan's glove so quickly and smoothly that it had the illusion of a clean catch. Replays appear to side with the Mets and the umpires on this one, and the Mets' two-out wrecking crew got to work in the bottom of the eighth as the game quickly metamorphosed from a nail-biter into a laugher.

Josh Thole and Ruben Tejada flied out to left and center fields, respectively, but Willie Harris, pinch-hitting for Capuano, singled to right and Jose Reyes singled to center before a Justin Turner RBI double gave the Mets a 2-0 lead and chased Correia from the game. RBI whore Beltran singled home Reyes and Turner to run the score to 4-0, and two batters later Pagan delivered the Mets' tenth hit of the game, and RBI single which plated pinch-runner Jason Pridie. It was the sixth consecutive two-out hit and it stretched the lead to 5-0.

Jason Isringhausen set the Pirates down in the bottom of the eighth, and the Mets padded their lead in the top of the ninth with back-to-back two-out solo home runs by Scott Hairston and Reyes. Bobby Parnell allowed a couple of singles in the ninth but kept the Bucs off the board to seal the 7-0 win and the Mets' fourth shutout of the season. 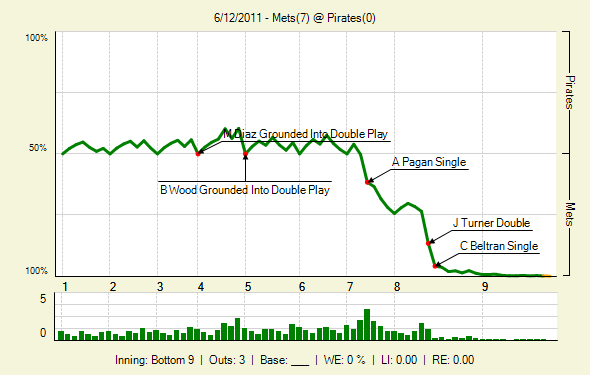