With a number of interesting questions in the Prospect Mailbag inbox this week, we're going to diversify and answer a few of them today:

"When Cory Vaughn started his minor league career in Brooklyn last year, he
had a very good season and kept pace as a good fielder as well. I am not sure
how well he's doing for the Gnats...he seems to be off to a good start as far as batting average and slugging percentage but to me he seems
that he will not hit more than 10 home runs. What do you think?"

The lack of homers seems strange on the surface as Vaughn was a flat-out masher last season with the Cyclones. And it isn't as if he's struggling with Savannah (.891 OPS). The thing to keep in mind though is that, in general, Savannah is a homer-suppressing environment.

For reference, Blue Jays third baseman Edwin Encarnacion -- who has hit as many as 26 homers in a season in the majors while posting a career .448 SLG -- posted a .453 mark in Savannah. It's certainly not easy on lefties either: Former Rangers slugger Hank Blalock -- who reached 25 homers on four different occasions in the bigs -- posted a .428 mark there. Another Mets prospect, Sean Ratliff -- who slugged .562 with Double-A Binghamton last season -- posted a .451 total there.

'Grayson [Stadium] is murder on HR...The power alleys are huge. We're listed at 400' straight away to CF and the right-center field gap isn't much shallower. Also, the RF wall is protected by a 16' fence almost all the way out to CF. There's almost no way a RHH hitter is leaving the yard to right-center. Left-center might be a few feet shallower, but there's a manual scoreboard, surrounded by signage that's also 16' high....We're at sea-level in a humid climate (thick, heavy coastal air)...The ball just doesn't travel here.'

So while his ~.450 SLG isn't nearly as pretty as his .557 mark last year in Brooklyn, given the rest of his offensive profile in 2010, I don't think we've got too much to worry about at this stage in Vaughn's career. Other than for those who thought he had his dad's prodigious 50-homer power, you may end up disappointed.

The Mets were known under Minaya as a team that rushed prospects. Have they swung too far the other way under Alderson? Robbie Shields is tearing it up in low A, but he's 23, for example. Den Dekker and Germen are other examples. Don't we need to see what these older players can do at the upper minor league levels? Isn't it basically now or never for them?

Your observations about the new regime are correct, they've been much more conservative thus far. But at this point, is that something we really want to complain about? After how badly Omar and Tony B mishandled this system for years, somebody needed to pump the brakes. Now the question is have they slammed them completely? I don't think so.

Just look at the below graph: 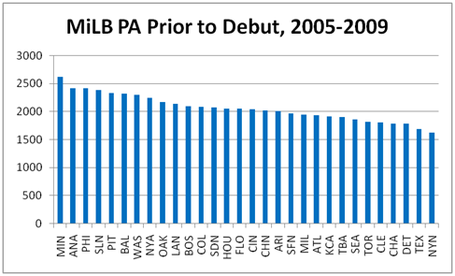 For the most part, the teams on the highest -- or most conservative -- end of the spectrum are teams that have had sustained success during this period, with obvious exceptions of course. A similar graph highlighting pitchers has Tampa Bay as the most conservative; and they seem to know what they're doing vis a vis developing young pitching. So my thinking is that even if Sandy swings us all the way to the left side, is that really such a bad thing?

Obviously a club could become conservative to a fault, but in my estimation Sandy has not done that. To pick on some of the guys you mentioned, den Dekker has posted good results but his underlying ratios (i.e. his K/BB rates) are not good, to put it nicely. Robbie Shields is another college guy but he underwent Tommy John surgery soon after the '09 draft so they've taken it slow with him defensively (he's already made 11 errors in 2011). Meanwhile a guy like Jeurys Familia was promoted to Double-A pretty quickly and 21-year old Ruben Tejada is back in the bigs instead of someone like Luis Hernandez.

But overall, for me, it's better to err on the side of caution and take it slow with these guys. Because to twist your words a bit, it isn't 'now or never'. Yes these college guys aren't exactly babies but look at a guy like Justin Turner, who was a four-year college player then spent four more full years in the minors. Coming into 2011 he was 26 and hadn't really ever gotten a shot in the bigs. And now look at him; the kid can play. Basically we've got six years of minor league control on each player and the major league club certainly isn't a prospect away from contending, so what's the rush?

Brant Rustich: What's going on with this guy? I assume he's still around...

After years of nagging arm problems, the 26-year old, '07 second rounder visited Dr. James Andrews last September. The diagnosis was a rare but treatable condition known as Thoracic Outlet Syndrome, where basically the nerves passing through the neck down to the arm are abnormally compressed, causing numbness and/or discomfort. So during the winter he underwent a procedure removing one of his upper ribs to widen that passage and theoretically put his injury problems in the past.

Currently, Rustich is on the DL but he is working out in PSL; he was not scheduled to start the season with any minor league club anyway. However, taking part in workouts during spring training, he was expected to be close behind and even indicated that he expected to be back very early. Perhaps the club is just taking it slow with him but you have to imagine things haven't progressed as quickly as he expected; no word about any setbacks, etc. Either way, I'd expect him to show up on the PSL roster at some point in 2011.

Side Note: Does anyone else find it weird that two separate Mets prospects (Rustich and Reese Havens) had ribs removed this winter in order to resolve rare syndromes?