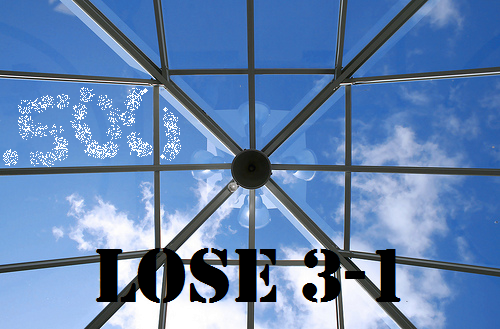 The top of the first inning went by quickly and quietly, but things got interesting in a hurry in the bottom of the inning as the Pirates came up to bat. Jose Tabata led off the inning with a single, and on Xavier Paul's ensuing single, Tabata was thrown out at third base by Angel Pagan. Well, that's how it looked to everyone who was watching the game and the following replay, anyways.

Second base umpire Jerry Lane had called interference on Jose Reyes, a miserable call that left Tabata standing safely on third base. Reyes wasn't in fantastic position on the play, but he in no way impeded the progress of Tabata, who had decided to take the turn for third base late and was running far wider than any baserunner normally would to go from first to third. Of course, Neil Walker singled to easily plate Tabata and put the Pirates on the board.

Mike Pelfrey got through the rest of the inning unscathed after picking off Paul at second base, getting Garrett Jones to fly out, and striking out Lyle Overbay to end the inning. That first run shouldn't have scored, but the inning could have turned out much worse than it did.

The Mets threatened to answer the run in the second inning after a one-out walk by Jason Bay and two-out single by Daniel Murphy put runners on the corners for Ruben Tejada, but Tejada flew out to end the inning.

Pelfrey and Maholm cruised through the next few innings, but the Mets again had the opportunity to score in the fifth inning. Murphy and Tejada singled to begin the inning, but with Pelfrey trying to bunt the runners over, Murphy was thrown out off second base by the catcher, an awful mistake that effectively ended the inning before Pelfrey grounded out to officially end it.

To make matters worse, Brandon Wood, he of the .178/.210/.266 career slash line entering the game, hit a solo home run leading off the bottom of the fifth to put the Pirates up 2-0. The best part of the inning was learning that Keith Hernandez purchased a yellow polyester cowboy outfit when he was called up to the big leagues because he did not own a suit to wear upon joining the team for a road trip to San Francisco.

The bats went silent again for both teams until the top of the eighth, as the Pirates opted to pull the very effective Maholm in favor of Jose Veras. Veras got into trouble in the blink of an eye, walking Tejada and giving up a pinch-hit single to Lucas Duda. Jose Reyes came to the plate with runners on the corners and nobody out, and it looked as if the Mets were about to get right back in the game.

Reyes hit a sinking line drive to left field which was just barely caught before hitting the ground by Tabata. Tejada read the play correctly, scoring easily from third, but Duda missed the out entirely and was standing on second base when he was doubled off at first base. That makes two days in a row that the Mets have hit into a sacrifice fly double play.

In the bottom of the inning, Manny Acosta got a quick out but gave up three consecutive singles to load the bases, and Tim Byrdak was brought in to try to get the Mets out of the Acostalypse with a shot to win the game. Byrdak struck out Xavier Paul but walked Neil Walker to give the Pirates a 3-0 lead. D.J. Carrasco made his first big league appearance in a while after that, and he got Acosta and Byrdak out of the mess by getting Matt Diaz to fly out to end the inning.

Joel Hanrahan pitched the ninth for the Pirates, of course, and he once again dominated the Mets. Carlos Beltran didn't looked overmatched but grounded out, and Angel Pagan looked plain silly with a strikeout. Jason Bay hit a fly ball to the warning track in left field, and the game was over.

The Mets once again failed to get to .500, but they've been playing fairly well of late and head to Atlanta in search of the elusive mark. Pelfrey's outing was another good one, and it included six strikeout over seven innings of work and required only 81 pitches before he was pulled in favor of a pinch-hitter. 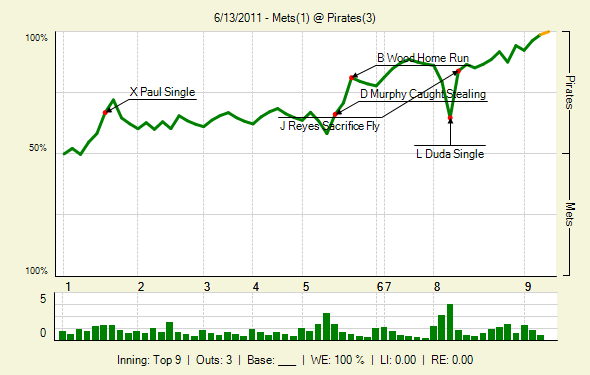