Comparing the 2008 Version of Jose Reyes to the 2011 Version

Share All sharing options for: Comparing the 2008 Version of Jose Reyes to the 2011 Version 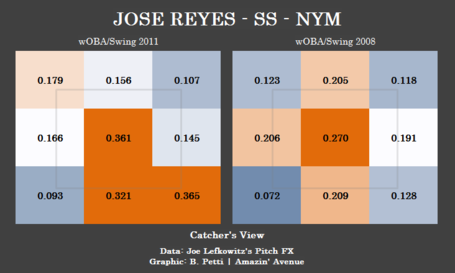 Yes, yes, we all know that Jose Reyes is having an outstanding season. He's leading the National League in fWAR (3.9) and is second only to Jose Bautista for the MLB lead. He's created 58% more runs than league average so far this year and, by most statistical measures, has been the best short stop offensively in the game.

With the trade deadline getting closer by the day every Mets fan is wondering if he'll be resigned or shipped off for prospects. The decision to sign Reyes will largely come down to the answers to these two questions:

2) What will the Mets' payroll be?

We don't really know how to answer the second question at this point, but that answer won't really matter until we determine which Reyes we are seeing.

To get a better handle on this I decided to look at the Pitch F/X data for Reye's 2008 campaign and compare it to this year's. Why 2008? In 2008, Reyes posted a .366 wOBA and created 23% more runs than league average (both the 2nd highest of his career). Coincidentally, the 2008 is the earliest date I could get data for.

So how does this year's version of Reyes stack up to 2008's version? Really, really well.

Despite hitting only three home runs so far this season, Reyes has a wOBA of over .400 and a wOBA per swing of .223. Compare that to his .366 wOBA and .193 wOBA per swing in 2008. Looking at his production on a per swing basis allows us to filter out the value Reyes gets from stolen bases. Certainly, his 20 steals this year have helped mitigate his lack of home runs, but wOBA per swing isolates only value accrued by swinging the bat. From that perspective, Reyes has been better so far this year even without the long ball.

Reyes has also decreased his K% by almost 3%. For a speed player like Reyes, that usually brings a nice boost in offensive value. More importantly, he's decreased his whiff percentage in key parts of the zone. 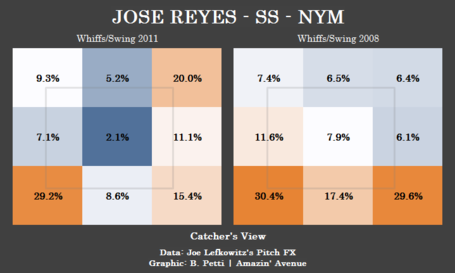 The graphic above shows Reye's whiffs per swing for 2011 and 2008. Reyes still has trouble with pitches down and away or down and in depending on what side of the plate he's hitting from. But outside of that area, Reyes cut down on his whiffs in just about every other zone, including the heart of the plate. In fact, if we cut the data by pitcher handedness (which also shows us Reye's handedness split), we see that Reyes hasn't missed a pitch that he's swung at down the middle hitting from the left side this year (see below). That's one reason he has a scorching .382 wOBA per swing from the left side on pitches in that location.

The one catch is that Reyes is sporting a batting average on balls in play (BABIP) of .371 this year. That's 60 points higher than his career average and 70 above league average. Being a faster player, we might expect Reyes to be on the higher end, but not by 70 points. Reyes' expected BABIP given the distribution of his batted balls is roughly .300.  Compare that to 2008 when he had an expected BABIP of roughly .325 (largely driven by hitting 4% more line drives). If you take Reyes' batted balls this year and regress his performance based on a .309 BABIP (his 3-year average), his wOBA drops from .403 to roughly .370.

Bottom line, when you look at what Reyes is managing to do this year one can make the argument that he's not only back to his 2006-2008 form, but that he's improving. Combine that with the fact that players with his physical capabilities tend to age more gracefully and the case to resign Reyes gets even stronger.