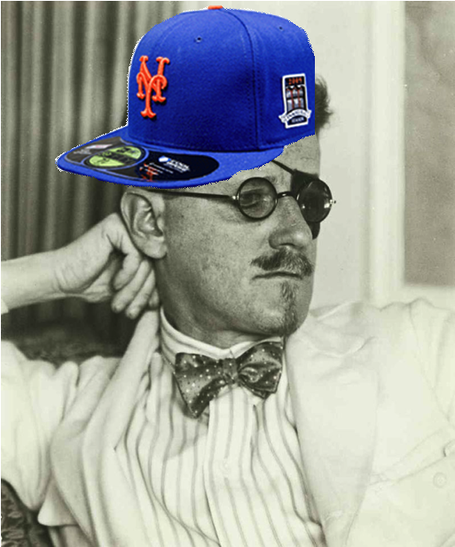 Stately, plump R.A. Dickey came from the stairhead, bearing a bucket of baseballs on which a bat and mitt lay crossed. A white home uniform, ungirdled, was sustained gently behind him on the mild morning air. He held the bucket aloft and intoned:

Halted, he peered down the dark winding stairs and called out coarsely:

—Come up, Murph! Come up, you bluecollar blaster!

Solemnly Dickey climbed higher and mounted the home run apple. He faced about and blessed gravely thrice the stadium, the surrounding land and the awaking airfields. Then, catching sight of Daniel Murphy, he bent towards him and made rapid crosses in the air, gurgling in his throat and shaking his head. Daniel Murphy, displeased and sleepy, took a seat on the home run apple and looked coldly at the shaking gurgling face that blessed him, equine in its length, and at the light untonsured hair, grained and hued like a louisville slugger.

Dickey crawled to the apple's edge and gazed out over Flushing bay, his fair oakpale hair stirring slightly.

—God! he said quietly. Isn't the sea a great sweet mother? The snotgreen sea. The scrotumtightening sea. Epi oinopa Dickeya ponton. Ah, Murph, the Greeks! I must teach you. You must read them in the original. Thalatta! Thalatta! She is our great sweet mother. Come and look.

Murphy stood up and went over to the apple's stem. Leaning on it he looked down on the water and on the trashboat clearing the harbourmouth of Flushing.

Daniel Murphy ate with relish the inner organs of beasts and fowls. He liked thick giblet soup, nutty gizzards, a stuffed roast heart, liverslices fried with crustcrumbs, shake shack, fried hencods' roes. Most of all he liked grilled premio which gave to his palate a fine tang of faintly scented urine.

Kidneys were in his mind as he moved about the clubhouse softly, righting Mike Pelfrey's breakfast things on the humpy tray. Another slice of bread and butter: three, four: right. Pelf didn't like his plate full. Right. He turned from the tray, lifted the kettle off the hob and set it sideways on the fire. It sat there, dull and squat, its spout stuck out. Cup of tea soon. Good. Mouth dry.

The team cat walked stiffly round a leg of the table with tail on high.

---O, there you are, Daniel Murphy said, turning from the fire.

Metsy mewed in answer and stalked again stiffly round a leg of the table, mewing. Just how she stalks around the dugout. Prr. Scratch my head. Prr.

—Afraid of our helmets she is, he said mockingly. Afraid of the gatorade coolers. I never saw such a stupid pussens as the pussens.

On quietly creaky cleats Daniel Murphy went up the staircase to the hall, paused by the training room door. Pelf might like something tasty. Thin bread and butter he likes before his starts. Murph said softly in the bare hall:

—I'm going round the corner. Be back in a minute.

And when he had heard his voice say it he added:

—You don't want anything to eat?

No. Pelf didn't want anything. He heard then a warm heavy sigh, softer, as Pelf turned over and the loose brass quoits of the rub-down table jingled. Must get those settled really. Pity.

Murph felt heavy, full: then a gentle loosening of his bowels. In the tabledrawer he found an old number of the Amazin Avenue Annual. He folded it under his armpit, went to the privy door and opened it.

Queitly he read, restraining himself, the first column and, yielding but resisting, began the second. Midway, his last resistance yielding, he allowed his bowels to ease themselves quietly as he read, reading still patiently that slight constipation of yesterday quite gone. So. Ah! Costive. Life might be so. It did not move or touch him but it was something quick and neat. He read on, seated calm above his own rising smell. Neat certainly. Kannengeiser often thinks of the masterstroke. Begins and ends morally. Glavotage. Smart. He glanced back through what he had read and, while feeling his water flow quietly, he envied kindly Mr Simon who had edited it and received payment of three pounds, thirteen and six.

The figure seated on a large boulder at the edge of the on-deck circle was that of a broadshouldered deepchested stronglimbed frankeyed freelymoled widemouthed largenosed longheaded deepvoiced barekneed brawnyhanded hairylegged ruddyfaced sinewyarmed hero. From shoulder to shoulder he measured several ells and his rocklike mountainous knees were covered, as was likewise the rest of his body wherever visible, with a strong growth of tawny prickly hair in hue and toughness similar to the mountain gorse (Ulex Europeus). The widewinged nostrils, from which bristles of the same tawny hue projected, were of such capaciousness that within their cavernous obscurity the fieldlark might easily have lodged her nest. The eyes in which a tear and a smile strove ever for the mastery were of the dimensions of a goodsized cauliflower. A powerful current of warm breath issued at regular intervals from the profound cavity of his mouth while in rhythmic resonance the loud strong hale reverberations of his formidable heart thundered rumblingly causing the ground, the summit of the lofty scoreboard and the still loftier walls of the stadium to vibrate and tremble. A baseball bat of acuminated granite rested by him while at his feet reposed a savage animal of the canine tribe whose stertorous gasps announced that he was sunk in uneasy slumber, a supposition confirmed by hoarse growls and spasmodic movements which his master repressed from time to time by tranquilising blows of a mighty cudgel rudely fashioned out of paleolithic stone.

What parallel courses did Keith and Ron follow on their way to the booth?

Starting united both at normal walking pace from the Jackie Robinson Rotunda they followed in the order named Field Level and Promenade, west: then, at reduced pace, each bearing left, the Caesar club by an inadvertence as far as the farther corner of the Metropolitan Box: then, at reduced pace with interruptions of halt, bearing right, the Pepsi Porch, north, as far as Delta Club. Approaching, disparate, at relaxed walking pace they crossed both the center field circus before Tacqueria diametrically, the chord in any circle being less than the arc which it subtends.

Of what did the duumvirate deliberate during their itinerary?

Music, literature, Ireland, Dublin, Paris, friendship, woman, prostitution, diet, the influence of gaslight or the light of arc and glowlamps on the growth of adjoining paraheliotropic trees, exposed corporation emergency dustbuckets, the Roman catholic church, ecclesiastical celibacy, the Irish nation, jesuit education, careers, the study of medicine, the past day, the maleficent influence of the presabbath, bunting.

Did Keith discover common factors of similarity between their respective like and unlike reactions to experience?

Both were sensitive to artistic impressions, musical in preference to plastic or pictorial. Both preferred a continental to an insular manner of life, a cisatlantic to a transatlantic place of residence. Both indurated by early domestic training and an inherited tenacity of heterodox resistance professed their disbelief in many orthodox religious, national, social and ethical doctrines. Both admitted the alternately stimulating and obtunding influence of heterosexual magnetism.

Were their views on some points divergent?

Keith dissented openly from Ronnie's views on the importance of dietary and civic selfhelp while Ronnie dissented tacitly from Keith's views on the eternal affirmation of the spirit of man in literature. Ronnie assented covertly to Keith's rectification of the anachronism involved in assigning the date of the conversion of the Irish nation to christianity from druidism by Patrick son of Calpornus, son of Potitus, son of Odyssus, sent by pope Celestine I in the year 432 in the reign of Leary to the year 260 or thereabouts in the reign of Cormac MacArt (died 266 A.D.), suffocated by imperfect deglutition of aliment at Sletty and interred at Rossnaree.

Was there one point on which their views were equal and negative?

The influence of gaslight or electric light on the growth of adjoining paraheliotropic trees.

the sun shines for you Murph said the day we were lying among the grasses of citi in the plain home whites and his blue hat that the day I got him to play catch with me me yes first I gave him the bit of shake shack out of my mouth and it was interleague like now yes 2 years ago my God after that long toss I near lost my breath yes he said I was a home run to the shea bridge yes so we are homeruns all the pitchers yes that was one true thing he said in his life and the apple rises for you today yes that was why I liked him because I saw he understood or felt what a pitcher is and I knew I could always pitch to him and I gave him all the sinkers I could leading him on till he asked me for a fastball yes and O that awful deepdown torrent yes O and the sea the sea orange and blue and the glorious field and the queer tall walls and the mo zone yes when I licked the tips of my fingers yes and how he strided into the lefty's batter box and I thought well as well him as another and then I asked him with my eyes to hit one again yes and then he asked me for a heater yes to say yes my shea bridge homer and first I came to the belt yes and drew back the ball and smelled the leather all perfume yes and his heart was going like mad and yes I said yes I'll pitch Yes.