Share All sharing options for: Jon Niese: Jekyll and Hyde

By cutting down his walks, adding ground balls, and, yes, being a little luckier this year, Jon Niese has taken a large step forward in his development. He's now a viable front-of-the-rotation starter despite having a below-average strikeout rate. There's still been a few too many baserunners, and a few too many blow-ups.

So far this year, Niese has ten starts in which he's held the opposition to fewer than two runs. He also has three starts where he's allowed more than five runs. Can we learn anything from looking at his blow-ups? Did Niese do anything demonstrably different on April 7th, April 13th and May 12th? Can we find a clue to unlock the best Jon Niese that Jon Niese can be?

His 'good' ground-ball-to-fly-ball ratio was 2.06. His 'bad' one was two on the nose. Perhaps his GB/FB ratio is also not the problem here. There's just not much of a difference in terms of the results of those at-bats. He's shown better control in his good games, but that's a little bit like saying that he's been better in his good games.

Let's look at his pitching mix for each game and see if there's anything in his process that was different. Just a cursory look at his pitch selection by start shows that Niese is still figuring out his optimal mix. 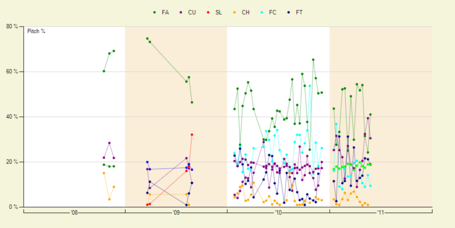 It's a bit of a head-scratcher to say that Niese needs to use his fastball more. It's not considered his best pitch, and it has been his worst pitch by pitch-type values on FanGraphs (though those values don't list two different fastballs). From a personal standpoint, I'm usually rooting for Niese to throw the curveball more. He is throwing it more in general this year, but the fact that he uses it about as often in his good and bad starts seems to suggest that the next step for Niese is figuring out how to use his fastball and cutter in the optimal mix. It's not always that you have to use your best pitch the most -- basic game theory holds that you need to set up your best pitch with the right usage of your other pitches.

There are tons of caveats here. Pitch F/x is not my wheelhouse, and I was forced to use the MLBAM pitch classifications. It was only thanks to Joe Lefkowitz that I was even able to do this much analysis. The sample size on the 'bad' starts is small, but it does include 266 pitches. Finally, consider this a call to our more Pitch-F/x-y readers out there. Please take this and run with it if there's anything to the idea that Niese could benefit from finding his best mix of fastballs and cutters. Perhaps Niese is still experimenting, and the bad starts can teach us all something, as the story of Jekyll and Hyde once did.