Thanks to severe thunderstorms moving through Atlanta, the Mets and Braves played an intermittent game of baseball in which the Mets reached .500 for the first time in nearly a month. Before it all began, there was a one-hour, twenty-two minute rain delay.

When Tim Hudson took the mound to get things started, Jose Reyes immediately made his mark on the game, drilling a double over the head of Jason Heyward and reaching third on as Heyward committed an error in his attempt to return the ball to the infield. Batting second in the order, Ruben Tejada grounded out, but Reyes scored easily as the Braves weren't playing the infield in at the early juncture in the game. Reyes' run was the only one the Met scored in the frame, but it was ultimately the only run they would need.

Dillon Gee had no problem with the Braves' hitters in the bottom of the first, second, or third innings, allowing merely a two-out double and walk in the second while retiring the other nine hitters he faced.

Daniel Murphy led off the fourth inning with a single, and Angel Pagan hit a towering home run off the right field foul pole to put the Mets up three-zip. The next three Mets went down in order, and the lead was handed back to Gee.

As the weather rapidly worsened, Gee had no problem setting down the Braves aside from his one-out walk to Chipper Jones. The umps called for a rain delay at the conclusion of the inning, ending Gee's night prematurely. In total, he threw four scoreless innings, struck out five, walked two, and gave up only one hit. As far as rain-shortened starts go, Gee was as good as it gets.

And then everyone waited for the rain to go away. The radar looked pretty daunting, and for a little while it seemed the Mets might have their four innings of success erased. In the meantime, everyone watched the Boston Bruins win the Stanley Cup, which was timed quite nicely with the resumption of the Mets' game at 10:50. The second rain delay had taken one hour, eleven minutes.

Once the game got restarted, the bullpen was superb. D.J. Carrasco threw two scoreless innings to maintain the lead, and in the top of the seventh inning, the Mets were able to add a lone run after loading the bases with nobody out. Willie Harris grounded into a force out at the plate but reached safely at first before Jose Reyes grounded sharply down the line, driving in a run as he was forced out on a very nice play by Eric Hinske at first base. That would be the last of the Mets' runs on the night.

With the four-run lead, the Mets handed the game over to Bobby Parnell, who made the Braves look like chopped liver. Over two innings of scoreless work, Parnell struck out five Braves, a pleasant sight for Mets fans in any scenario.

Angel Pagan made an ultimately irrelevant but still mind-boggling baserunning mistake with two outs in the eighth inning as he attempted to steal second base and was tagged out easily as he opted not to slide. The inning ended on the play, but Pagan would have been safe if he had just hit the dirt.

It didn't really matter too much in the end as Francisco Rodriguez had an easy ninth inning, setting the Braves down in order. 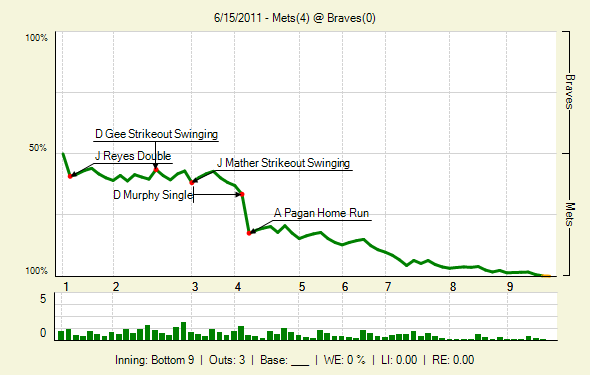