Share All sharing options for: Braves 9, Mets 8: Baseball Giveth and Baseball Taketh Away 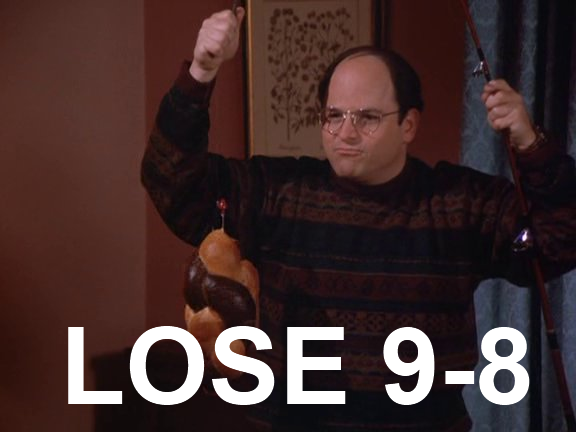 One baseball game in Atlanta had enough ups and downs packed into it to last a month.

Jose Reyes singled and stole second base to begin the game, and the Mets immediately had a chance to jump out to a lead. Justin Turner drew a rare walk, but Mike Minor set down Carlos Beltran, Daniel Murphy, and Jason Bay in order to put an end to the inning.

The Braves followed up with a quick threat of their own. Jordan Schafer lofted a bloop single to left field, and R.A. Dickey walked Jason Heyward. With runners on first and second and nobody out, a passed ball by Ronny Paulino allowed both runners to advance. Schafer scored the first run of the game on a ground out by Chipper Jones, but Dickey struck out Freddie Freeman and got Dan Uggla to pop up to hold the Braves to just one run.

Both teams went quietly in the second inning, but Jose Reyes was due up first in the top of the third inning. On a soft fly ball to shallow center field, Reyes wound up with a triple as the ball fell in front of Schafer as he tumbled over it. Never seen that one before. Turner grounded a single to tie the game at one, and after fouling off a ton of pitches,, Beltran ripped a double to advance Turner to third. Murphy hit a sacrifice fly to center to score Turner and put the Mets up 2-1. Unfortunately, that was it for the Mets’ scoring in the inning.

Schafer once again blooped a single to left to lead off the bottom of the inning. With Heyward swinging, Schafer was running, and as Reyes tried to get back from covering the bag, he wasn’t able to handle the ball and was charged with an error as Heyward reached safely. Dickey fell behind Chipper Jones 3-0, and what came next was a surprise to no one: a three-run home run that gave the Braves a 4-2 lead.

The Mets didn’t score in the fourth, but Dickey walked Eric Hinske to start the Braves’ half of the inning. After getting a pair of strikeouts, Dickey surrendered three consecutive singles to Schafer, Heyward, and Jones, and the Braves increased their lead to four.

This being a baseball game, though, it was far from over.

Mike Minor walked Turner and Beltran to begin the fifth inning, and after retiring Murphy on a smoked line drive, he gave up a rib-eye single to Bay to cut the Mets’ deficit to three runs. Fredi Gonzalez knew it was time to give Minor the hook and opted for Scott Proctor. He struck out Paulino but served up a high meatball to Scott Hairston, who hit a bomb to left field to tie the game at six.

From there, the battle of the bullpens continued. Manny Acosta threw a 1-2-3 fifth inning, and George Sherrill did the same in the top of the sixth. Pedro Beato allowed only a two-out single to Schafer in the bottom of the inning, his fourth hit of the night, but Ronny Paulino gunned him down attempting to steal second an a beautiful throw to end the inning.

The seemingly invincible Jonny Venters came in to pitch the seventh and quickly got into a big jam. Beltran singled, Murphy struck out, and Bay singled, and Venters then walked Paulino to load the bases. Hairston came back to the plate with another huge opportunity, but it was Venters who delivered the Mets’ seventh run as he struck out Hairston on a wild pitch. Ruben Tejada grounded out to end the inning, but getting a run off Venters was still an enjoyable result.

Tim Byrdak came on for the bottom of the seventh, and Reyes made an excellent bare-handed play on a chopper to throw out leadoff man Jason Heyward. Larry and McCann singled next, however, putting runners on the corners. Byrdak made Freddie Freeman look ridiculous with a slider way outside to strike him out and got Dan Uggla to ground out for the third out.

With Venters still on the mound, Angel Pagan led off the inning as a pinch hitter, chopping a ball to third base that was fielded nicely by Jones. His throw to first base, however, went wide of the bag, and as Freddie Freeman tried to apply a tag to Pagan, he tripped him. Pagan tumbled awkwardly over the bag, and though he never touched it, he was ruled safe. He appaered to be injured on the play, but he stayed in the game and looked alright as he ran the bases.

Next up was Reyes, who hit a hard grounder up the middle that knocked off Venters’ glove, but Venters had plenty of time to throw him out at first base. He then intentionally walked Turner and got a ground ball from Beltran which could have ended the inning, but Dan Uggla’s throw to first base sailed way over Freeman’s head, and Pagan scored easily to give the Mets a two-run lead.

Bydrak began the eighth and got a one-pitch pop out from Hinske before yielding to Jason Isringhausen. Izzy retired the only two batters he faced to keep the Braves down by two.

The Mets didn’t do anything against Craig Kimbrel in the ninth, and Francisco Rodriguez was summoned from the bullpen. Once again, the game was far from over.

Rodriguez struck out Schafer with ease but gave up a single to Heyward and a game-tying two-run home run to Brooks Conrad. Brooks freakin’ Conrad. It looked like the game was over a moment later as Brian McCann hit a ball just a few feet shy of the fence in center field for the second out of the inning. He allowed a line drive single to Freeman but struck out Uggla to send the game to extra innings.

From there, it didn't take long for the game to end. The Mets didn't score in the top of the tenth, and the bottom of the tenth was just plain ugly. After a leadoff walk, Alex Gonzalez hit into a double play. Two outs, nobody on looked pretty good.

Diory Hernandez then doubled, but the inning appeared to be over on a routine ground ball to second base by Schafer. But wait, Lucas Duda ranged extraordinarily out of position in an attempt to field the ball and botched the play miserably. The inning would have ended had he just let the ball go to second baseman Ruben Tejada.

And then came the grand finale. With runners on the corners, D.J. Carrasco balked, and the Braves were awarded their ninth run to win the game. Yep, that happened. 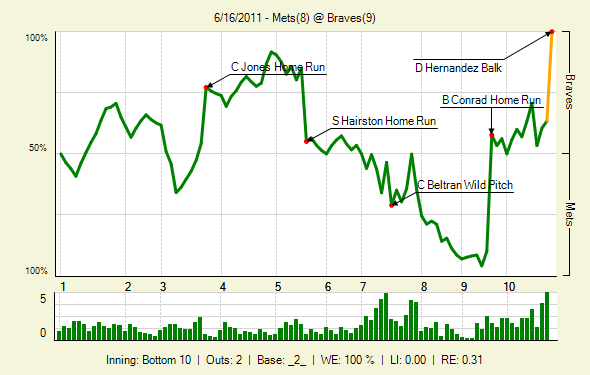