Angels 7, Mets 3: Ninth Inning Field Goal Makes It Seem Closer Than It Was

Share All sharing options for: Angels 7, Mets 3: Ninth Inning Field Goal Makes It Seem Closer Than It Was

If this game were a movie it would have an 8% rating on Rotten Tomatoes. It would rate lower than the 1997 Billy Crystal-Robin Williams paycheck flick Father's Day (19%). Armond White would write a contrarian positive review of this game and liken it to some obscure song by The Black Keys.

Jon Niese threw a stinker, allowing five runs on eight hits in just four innings. The big blow was a bases-clearing triple by Erick Aybar in the second inning that made it 4-0 before the latecomers could find their seats. Location was Niese's undoing -- he was up in the zone throughout his brief outing. Compare his strike zone plot from today vs. his effective start last Tuesday against the Braves. First today:

Notice all the dots (pitches) in the dangerous upper half of the zone. And last Tuesday:

That's more like it. A plot to make Dave Duncan proud. Niese had been terrific over his previous six starts though so a mulligan is his! D.J. Carrasco pitched a scoreless fifth inning in relief of Niese but after a forgettable two-inning appearance by Manny Acosta the score was 7-0.

The Metsies had a strange game offensively. They reached base 14 times but didn't score until the 9th inning when a string of singles led to 3 runs. In 5 separate innings they managed at least 2 baserunners. Justin Turner accounted for the only extra-base hit, a first inning double. The Left-On-Base God was smiling upon Tyler Chatwood. Scott Hairston appeared to be safe at first on the last out of the game but it's hard to be upset because it's a beautiful day and the Mets still lost by 4 runs.

Some other info about this game:

A series win at home against the underwhelming Angels was an attainable step towards surpassing .500. Oh well. A day off tomorrow will allow the Mets a break to regroup and prepare for the 32-40 Oakland Athletics. The pitching matchup on Tuesday is Dillon Gee vs. Josh Outman. 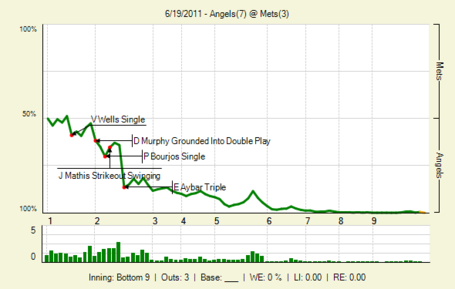