Share All sharing options for: More on Jason Bay's Declining Performance: wOBA and Whiffs per Swing 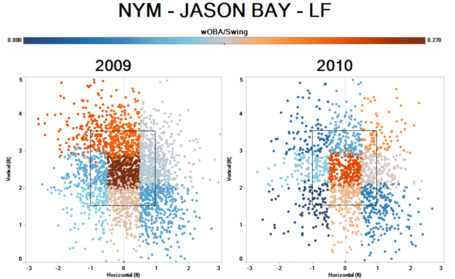 On Tuesday, Chris wrote a great article that tried to tease out the cause of Jason Bay's effective collapse as a middle of the order hitter since joining the Mets in 2010. Bay was coming off solid back-to-back years (.387 and .397 wOBA respectively) with Pittsburgh and Boston. Upon arrival with the Mets, his power seemingly vanished. Some hypothesized he changed his swing for Citi Field, others think he was never truly healthy (a major reason why the Red Sox passed on his services).

I wanted to follow up on Chris' piece by cutting the pitch f/x data another way. I calculated Bay's weighted on-base average (wOBA) per swing for each of nine pitch location zones for his 2009 season in Boston and his first season in Flushing last year. I also calculated whiff rates as well and created heat maps for each to get a better sense of what's happening with Bay.

First, Bay managed a wOBA of .178 with every swing in 2009. That declined to .140 his first year with the Mets. The decline was particularly pronounced in certain parts of the zone. The graph above compares Bay's wOBA per swing in 2009 and 2010. As you can see, Bay's power decline can be summed up by his diminishing ability to make pitchers pay when they give him something to hit in the middle of the zone and, more surprisingly, high in the middle of the plate.

Isolating to just fastballs, we see even more evidence that Bay can no longer get around on the hard stuff. 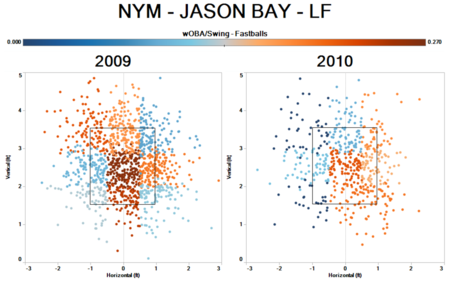 In 2009, Bay hit eight home runs off of fastballs down the heart of the plate. He also hit six home runs on pitches down the middle and up in the zone. In 2010? Only one and zero respectively.

As interesting as this is, the more telling stat is his whiff rate on balls inside last year, particularly fastballs. 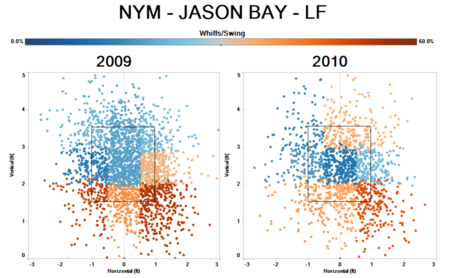 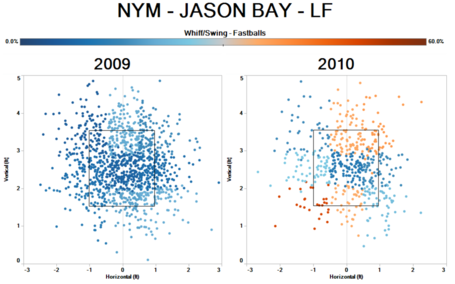 Given that he's having trouble catching up to and driving balls up in the zone as well as inside it suggests to me that while Citi may be depressing his stats to some degree, Bay has simply changed as a hitter. It's either a matter of ageing and the slowing of his bat or an injury. If it's the latter, a problematic shoulder would certainly be consistent with slower bat speed and an inability to drive or catch up to high heat.

Bottom line, I'm not encouraged that Bay can simply work his way out of this.

You can view all four visualizations in larger, tabbed form here.