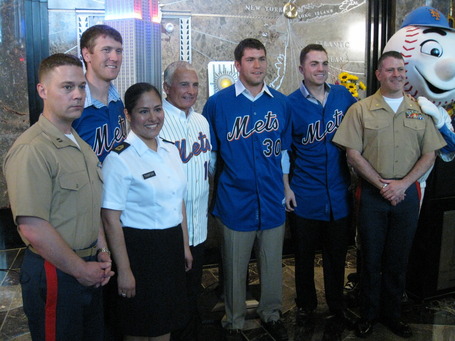 The Mets continued their Teammates Week festivities at the Empire State Building on Wednesday by sending a delegation of Terry Collins, David Wright, Jason Bay, and Josh Thole to participate in a ceremonial lighting of the landmark building in honor of the contributions of the U.S. Armed Forces.

While the hour-long event consisted largely of brief speeches and prolonged photo opportunities, it served as a continuation of the team's recognition of our nation's military efforts. As a symbol of the recognition, the Empire State Building was lit in red, white, and blue for the military as well as orange and blue for you know who.

While it may not have brought any of us any closer to world peace, it was a nice ceremony that continues the team's efforts to say thank you to those who most definitely deserve it.

In case you missed many of the military appreciation events being sponsored by the Mets this week, here's the description of this year's Teammates Week theme from a recent press release:

...the military theme for "Teammates Week" builds on the Mets' ongoing commitment to support our troops through "Welcome Back Veterans," a national public awareness and fundraising initiative that addresses the mental health and employment needs of America's returning war veterans and their families.

Rather than innundate you with a rambling summary of every photo and mumbled comment, here's a short video summary of Wednesday's events. Enjoy!