On Thursday afternoon, the Mets answered a seven-run lead conceded early by Mike Pelfrey en route to salvaging a 9-8 win and series split against a no-longer-awful Pittsburgh Pirates team. But it wasn't a rally that headlined the Mets' biggest comeback in a regular season game since Mike Piazza capped that ten-run rally against the Atlanta Braves in 2000. It was a curious series of fortunate events that opened the bottom of the eighth.

After Ronny Paulino led off the inning with a single, Collins elected to call upon the much-maligned-but-still-present Willie Harris to pinch run for his catcher while allowing Chris Capuano to pinch-bunt for the lineup spot assigned to Jason Isringhausen. Pirates reliever Jose Veras then committed a balk on a 1-1 count that moved Harris to second -- which then motivated Collins to send Josh Thole in to pinch-hit for Capuano. Harris later moved to third on a wild pitch and scored the go-ahead run on a sacrifice fly by Ruben Tejada. An eighth-inning, bases-loaded walk by Carlos Beltran that scored Josh Thole later turned out to be the winning run.

Beltran led the offensive charge by factoring in five of the Mets' nine runs on Thursday -- including a three-run home run to deep left center field that opened the Mets' scoring in the third inning and a sixth-inning double that sparked a four-run rally. Tejada also showcased his big-boy bat by driving in Beltran and Jason Bay in the sixth and later driving Harris in for the go-ahead run. The scoring deluge against opposing starter Paul Maholm ended a Pittsburgh starter streak of surrendering two or fewer runs in thirteen straight starts.

A confluence of questionable umpiring and shoddy defense dug Pelfrey's hole for him in the first, with the Pirates mustering up three runs from a "Hit 'em where they ain't" demonstration that would make Wee Willie Keeler smile. Unfortunately, Pelfrey did himself no favors by surrendering a base hit to every Pirates batter not named Lyle Overbay (including one to Maholm, who singled off Pelf in the third inning). He failed to throw any of his pitches for anything resembling effectiveness and mustered only four swinging strikes from the 88 pitches Pelfrey needed to struggle through five innings of work.

The Mets' bullpen finally relieved Pelfrey of his troubles in a positive way by scattering one walk and two hits while leaving only one runner on base across three innings of work, with Tim Byrdak and Bobby Parnell contributing and  Isringhausen earning his first win as a Met since 1999 . Francisco Rodriguez conceded a run but otherwise pitched a relatively painless ninth inning to collect his 16th save of the season and 21st game finished.

The Mets welcome those pesky Atlanta Braves to Citi Field for a three-game series commencing tomorrow night at 7:10pm. Jon Niese will toe the rubber for the Mets against Derek Lowe of the Braves. 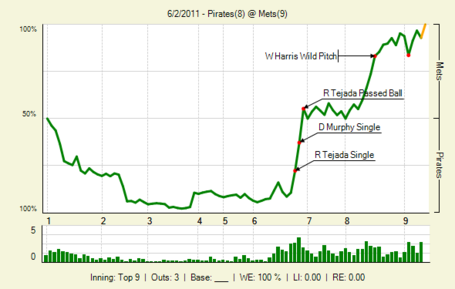 Nice job by Shinjo Is God; his effort in the game thread embiggens us all.