Not Many Signs of Regression for the Mets' Starting Rotation

Share All sharing options for: Not Many Signs of Regression for the Mets' Starting Rotation

The Mets have been without David Wright and Ike Davis for over a month, but they currently sport a respectable 35-37 record and trail the second-place Braves by four and a half games.The starting rotation has clearly been one major reason why the team has stayed afloat without two of its biggest home run threats.

Since May 16, the first game without both sluggers, the Mets have allowed 4.19 runs per game, which is just a bit higher than the National League average of 4.14 runs allowed per game on the season. That number is inflated by the bullpen's performance, though, and the starters have combined to produce a 2.70 ERA over that span.

Although they've only been striking out opposing hitters at a rate of 6.7 strikeouts per nine innings, the rotation has been very stingy with walks, giving up only 2.1 per nine. Factoring in the rest of the components of FIP - home runs, hit by pitches, and intentional walks - the starters have combined to produce a 3.33 FIP during their recent run of success. The gap between their ERA and FIP suggests they've been over-performing for the past month.

Moving forward, the team's chances of remaining relevant depend largely upon two factors: whether or not the pitchers will regress and the return of Wright, Davis, or both. Let's have a look at each starter's ERA, FIP, and xFIP for the entire season to see what kind of regression might be expected of these pitchers. 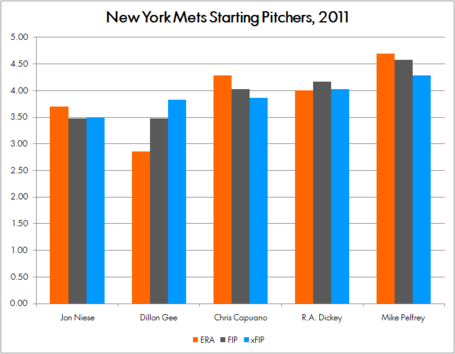 Jon Niese, Chris Capuano, and Mike Pelfrey should all see improved results, and R.A. Dickey figures to maintain his current rate of success. That's all good news. A few weeks ago, I wrote that Dillon Gee was for real so far because he had a 3.83 ERA, 3.94 FIP, and 4.05 xFIP. Now, Gee appears in line for some serious regression as his 2.86 ERA sits nearly a full run below his 3.83 xFIP.

Even if Gee comes all the way back down to earth, he would still be a pretty good big league pitcher, and the improvement of Capuano and Pelfrey could offset a decline in performance by Gee. The rotation was an area of concern entering the season, and after Chris Young went down with his season-ending injury, it looked to be even more of a question mark, even though there was no way Young was going to end the year with a sub-2.00 ERA.

There's still a major lack of starting pitching depth beyond the five guys in the rotation at the moment, and I'd be surprised to see Johan Santana pitch for the Mets this season. If the team were to need a starter for any reason, their two best internal options appear to be Chris Schwinden, who's throwing pretty well at Buffalo, and D.J. Carrasco, who spent his time in Buffalo starting before returning to the big league bullpen.

For now, at least, it looks like the rotation is fully capable of keeping the Mets competitive, and that's a pleasant surprise.