It's an east vs. west saber-battle, with Billy Beane's pitching-heavy Athletics visiting Sandy Alderson's on-base percentage Mets. Well, the A's had been pitching-heavy at the start of the season but their rotation has struggled with injury. Brett Anderson, Dallas "209" Braden and Brandon McCarthy are on the disabled list. Braden is done for the year. Here are this week's pitching matchups:

Ron Romanick is in his first season as A's pitching coach but has been involved in coaching for the last two decades. He also pitched a little -- in 531 innings over 3 seasons with the Angels from 1984-1986, Romanick posted a 4.24 ERA. He pitched to contact. Now some words on the pitchers the Mets will face:

Interesting fact: Outman wears #88 after giving up his old number, 55, to Hideki Matsui in return for a gift card to Guitar Center. Wacky southpaw right here. He wore #8 in college and simply doubled it up.

What's the story? Outman was sent to the A's by the Phillies in the Joe Blanton deal in 2008. He underwent Tommy John Surgery midway through a moderately successful 2009 campaign and missed all of 2010. His rehab outings at Triple-A this season weren't going particularly well -- he walked 26 batters in 37.2 innings -- but he was nevertheless called up after the McCarthy injury.

Outman threw seven shutout innings against the Royals last Wednesday despite a 2/2 K/BB ratio. His 3.14 ERA is pretty but the strikeouts haven't been there yet in his small sample size 28.2 big-league innings this season (3.77 strikeouts per 9 innings). He is a pronounced flyball pitcher. Outman's fastball velocity sits in the 91-94 range and he also features a slider, curveball and changeup.

Against the Mets: Outman has never faced the Mets.

Interesting fact: One of Gonzalez's favorite restaurants is Red Lobster. He threw a celebration there when the White Sox drafted him.

He misses bats and suppresses home runs, but his control is poor. He has the 6th worse walk rate in MLB for qualifying starters (4.34 per 9 innings). Think a groundballing version of 2007-2008 Oliver Perez, which is actually quite valuable. Despite his wildness, Gonzalez has the 12th best ERA in MLB, even if his peripherals don't support it. He throws a low-to-mid 90s fastball and a curveball, also mixing in a changeup.

Against the Mets: Gonzalez has never faced the Mets. 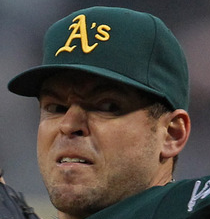 Interesting fact: The Athletics Nation Godfrey Face Contest received zero entries, as all community members were too terrified to enter.

What's the story? Like Outman and Gonzalez, the righthanded Godfrey was not originally drafted by the A's. He was acquired from the Blue Jays in the Marco Scutaro trade in 2007. He made his MLB debut earlier this month after Anderson hit the DL.

Although never a highly touted prospect (John Sickels gave him a "C" grade in 2008 and Godfrey hasn't ever made Sickels' top 20 A's young'ns) he did post a tidy 3.21 K/BB rate at Triple-A this season before his call-up. He allowed two runs in seven innings last Friday against the Giants in a 5-2 A's victory. Godfrey's fastball velocity is around 90-92 and his various off-speed offerings are not plus pitches. He's not total dreck but keep in mind his spot on the depth chart as an almost 27 year-old.

Against the Mets: Godfrey has never faced the Mets.

Overall outlook: Gonzalez is a fine young pitcher but Outman is still finding his way and Godfrey is underwhelming. Combined with the A's pathetic offense, anything less than taking two of three in this series is a disappointment. It's time to start playing better at home. Also, give Scott Hairston a start or two in this series -- he has historically performed well against lefties. And in a shocking twist, Hairston has the fourth best wOBA on the team, albeit in limited playing time.