In honor of R.A.'s masterful performance last night, we'll take a look at one of his most significant influences, knuckleballing luminary Phil Niekro. After making the switch to the knuckler full-time in 2008, Dickey reached out to the man who tamed the erratic pitch best. According to Dickey, Niekro had a significant effect:

"Phil Niekro shared with me a thing that I’ve really kept close to my heart, as far as pitching goes. And that is: I throw a bad knuckleball, or I throw a great knuckleball, or I throw one that goes behind the hitter’s head, or throw one that he swings and misses and hits him, or whatever I do, always act like I meant to do it. Because the hitter doesn’t know the difference."

Also, I felt this card worth noting as it honestly looks like my grandpa suited up for the Indians. Seriously, does he not look like he's 84 years old in that picture?

No doubt Niekro's greatest disappointment must have come on May 29, 1976 when he surrendered the only home run that his brother and fellow knuckleballer Joe Niekro would hit in his entire career.

So there you have it, a 1987 Topps Phil Niekro: (click images to embiggen) 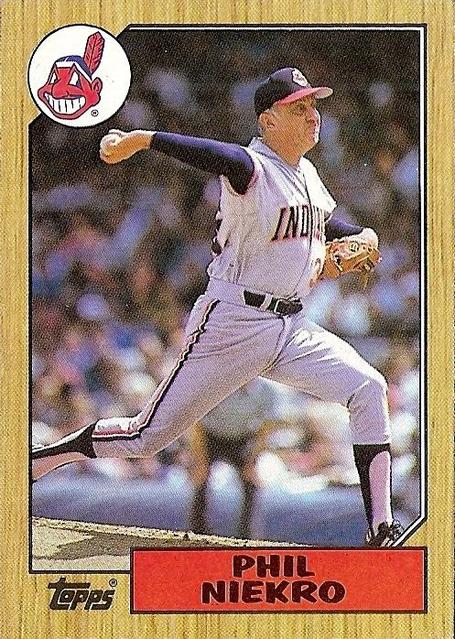 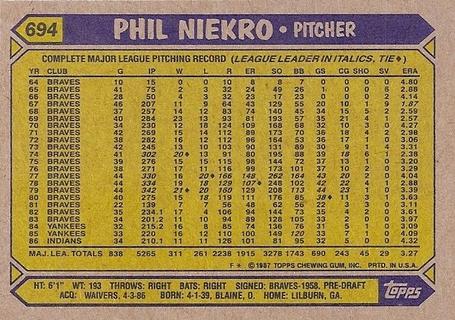 And just for fun, some quotes by or about Niekro (and his knuckleball):