*All results from games played on Wednesday, June 22nd 2011

Mark Cohoon was very hittable last night, allowing 10 hits in his 4.2 innings of work.  He managed to keep the game in reach for the offense by not walking anyone, and the Herd hung around -- hitting up cult hero Dirk Hayhurst -- until the bullpen imploded (in typical Mets fashion) in the 8th, allowing 5 runs to cross the plate and seal the win for the Bulls. 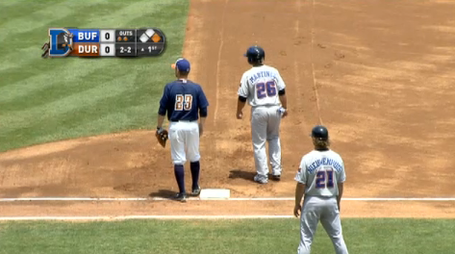 Hey, I recognize that first base coach! Good to see Kirk keeping busy during his stint on the DL...

The Binghamton Mets were pretty punchless on the whole, but packed the majority of their offensive work into a three run sixth inning to secure the victory.  Robert Carson had control issues that shortened his outing, but Brad Holt had a decent 2 inning relief appearance to earn the win.

St. Lucie exploded for five runs in the sixth to power by Charlotte.  Juan Lagares led the way with a big night, and Kyle Allen was pretty solid after a rough first inning.  The win closes the first half of the season with a division win for St. Lucie, who will start fresh at 0-0 tomorrow.

Brooklyn jumped out to the lead early, scoring a pair of runs in both the second and third innings.  They'd never look back, going on to a comfortable victory behind some solid pitching for their fifth consecutive victory.

It was a fairly nice outing for flamethrower Domingo Tapia, striking out 6 and walking none in his debut.  The offense could only manage a handful of hits, however, and Kingsport suffered their second straight loss to open the season.

A strong start by Alberto Baldanado got the Mets up early, and the offense was on top of their game tonight.  Carlos Levya, Gilbert Gomez, and Jeyckol De Leon all had multi hit performances to help the Mets earn their first win of the season.

Star of the Night
Going to the GCL tonight for Carlos Levya.  The number nine hitter paced the club with a three hit, five RBI performance to put the team in the win column.