Mets 4, A's 1: Capuano's Joy of Six Segues Past Oakland With Reyes Riding Along

Share All sharing options for: Mets 4, A's 1: Capuano's Joy of Six Segues Past Oakland With Reyes Riding Along

It's always worth the wait when your side's pitching well, even when it means waiting out a two-hour, 15-minute rain delay on getaway day to do it.

The combination of Chris Capuano on the mound with Jose Reyes and Daniel Murphy at the plate empowered your New York Mets to prove Moneyball was a farce collect a 4-1 victory over the Oakland Athletics in the rubber game at Citi Field on Thursday afternoon.

Chris Capuano needed 88 pitches over six scoreless innings of lights-out baseball for his sixth win of the season, but begrudgingly left the game with discomfort on the right side of his abdomen. He balanced his fastball with a very effective changeup to collect seven strikeouts while walking none and scattering five hits. While Capuano didn't do much at the plate, his double play in the first inning also enabled Jason Bay to opening scoring for the good guys on a fielder's choice.

Thursday's scoring summary revolves around Jose Reyes, who factored in on three of the four runs scored by the Mets. Reyes collected two RBIs singles and also scored a run courtesy of a Daniel Murphy single in the fifth inning. SNY helpfully pointed out that Reyes now has 37 multi-hit games in 72 games played this season, but, sadly, made no mention of the Mets' homegrown shortstop expressing a change of heart and signing a long-term extension for a hometown discount with the only club he's ever known.

While Jason Bay's first-inning single will do little to dissuade the doubters of his dubious offensive output, Murphy did produce a commendable performance to supplement that pesky Jose Reyes. He collected three hits in four plate appearances and played sufficient enough defense to not draw attention to the fact that there's still no future for Murphy in Flushing at the hot corner. Still, good game.

The bullpen blew the shutout for the Mets, but a Coco Crisp sac fly to center field is not enough to wag your finger at what was otherwise two innings of effective relief by Pedro Beato. Francisco Rodriguez pitched a one-two-three inning in the ninth to collect his 20th save and 28th game finished of the season.

While it didn't affect the outcome, the other news came from Sandy Alderson after the game regarding David Wright. Alderson announced that Wright is cleared to resume baseball activities after missing what seems like eleventy billion days with a back injury. It's unclear what Wright's rehabilitation schedule will look like, but it will look like something very soon. And that is good. HUZZAH!

The Mets hit the road to face the defending American League champion Texas Rangers for a three-game series at the Ballpark in Arlington commencing tomorrow night at 8:05pm. Mike Pelfrey will toe the rubber for the Mets against Matt Harrison of the Rangers. 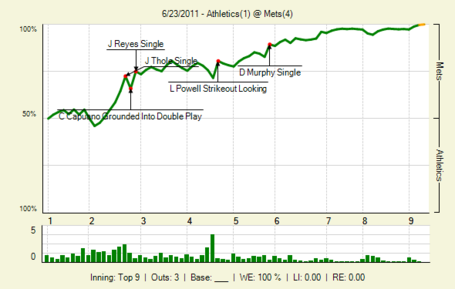