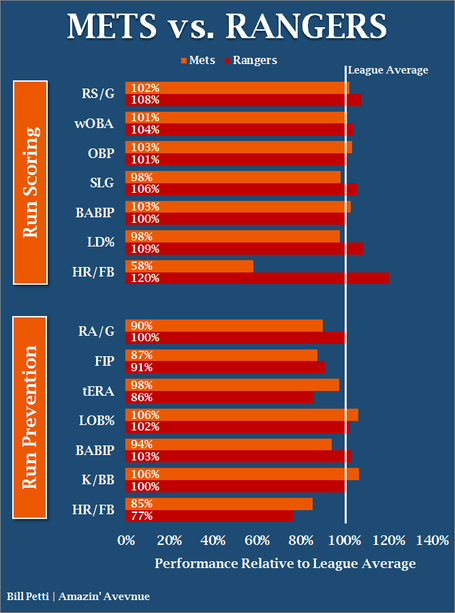 The Rangers have a more potent offense, particularly when it comes to the long ball. However, that's largely a function of their home ballpark. Away from Arlington, the Rangers HR/FB ratio is only 7%, versus 15.2% at home.

The Mets' pitching staff has a HR/FB against of 7.4% at home versus 11.6% on the road--second worst in all of baseball.

Given that the Mets are traveling to Texas for this series we are likely to see some long balls from the Rangers. The Mets? Maybe, but it doesn't look good. Even with the friendly dimensions of the Rangers park the Mets have the third lowest HR/FB ratio in the league on the road. The Rangers staff has a HR/FB ratio of 11.9% at home, so that might help the Mets offense, but New York has a HR/FB ratio of only 4.7% during the month of June.

I hate to say it, but I think the Mets only manage one win before heading to Detroit next Tuesday.