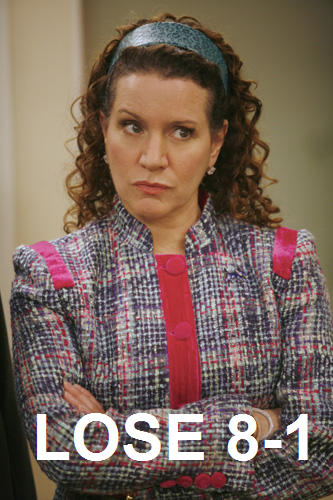 If you guessed that the Mets would not fare well at the Ballpark in Arlington with Mike Pelfrey on the mound, you guessed right. The Mets' bats didn't do anything in the first inning, and Big Pelf struggled right out of the gate.

The bottom of the first began with a fly ball to left-center field in the area between the sun and the shade, and Jason Bay dove but had the ball go in and out of his glove to give Ian Kinsler a leadoff double. After a sacrifice bunt, Josh Hamilton singled to put the Rangers on the board. Adrian Beltre followed, and he jacked a home run to give the Rangers an early 3-0 lead.

The Rangers didn't really need any more runs after that, but while the Mets continued to struggled against Matt Harrison, they did. In the fourth inning, Elvis Andrus hit a two-out single to plate former-almost-Met Yorvit Torrealba and put Texas up by four.

The Mets did manage to avoid a shutout in the top of the fifth, with began with Ronny Paulino, bringer of doom to left-handed pitchers, doubling. Two batters later, Daniel Murphy singled to put runners on the corners, and then Ruben Tejada singled to bring Paulino home. Jose Reyes came up to the plate next, but he grounded into a rare double play to put an end to the Mets' shot at getting back in the game.

To Big Pelf's credit, he got through the sixth inning without allowing any more runs, giving the Mets at least a hypothetical chance at winning the game. Then came to Acostalypse.

Last year, I defended Manny Acosta when his detractors spoke out against him, but there's no defending the guy so far this year. Acosta's night began in the seventh inning, and after a one-out double by Adrian Beltre on a ball that Carlos Beltran misplayed, he served up a home run to Michael Young. The Rangers were up five runs.

Acosta's eighth inning was deja vu all over again. With Ian Kinsler on base after a walk, Josh Hamilton hit another two-run dinger, extending the Rangers' lead to a ridiculous seven runs. Acosta gave up a double to Beltre and could have easily given up another run on the ensuing single by Young if the Rangers' third base coach had sent Beltre home. The almost-ninth-run marked the end of Acosta's night.

D.J. Carrasco came out of the bullpen to put out the fire, and the Mets went down quietly once again in the ninth inning. They are now two games under .500 yet again, and they'll try to climb back to an even record beginning tomorrow afternoon. 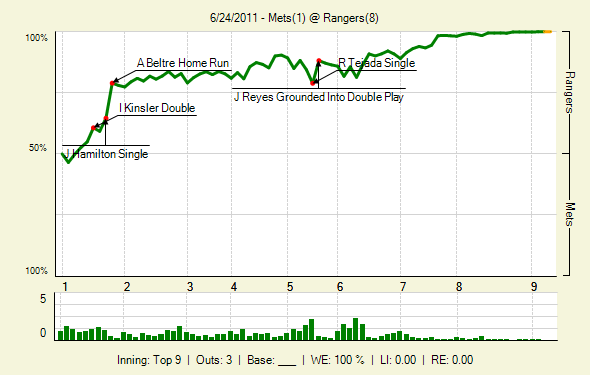