Share All sharing options for: Mets 14, Rangers 5: That Was Easy 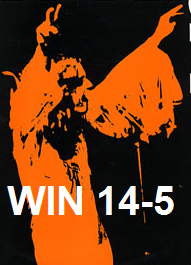 Baseball games don't get much easier than this. The Mets jumped out to an early lead this afternoon in Texas and kept scoring runs to easily defeat the Rangers.

The game began with singles by Jose Reyes and Willie Harris which were quickly followed up by a ball ripped into the gap by Carlos Beltran which scored both of them. Beltran wound up on third base with what was officially deemed a triple after the ball bounced off the sliding Nelson Cruz from the gap into center field. Daniel Murphy then hit a sacrifice fly to left field, putting the Mets up by three before the Rangers had their first turn at the plate.

Ian Kinsler began the bottom of the inning with a single, but the Rangers opted to sacrifice bunt, down three runs in the first inning with Kinsler on first and nobody out. Managers are truly amazing. Unsurprisingly, the Rangers didn't end up scoring in the inning. The Mets also caught a break in the bottom of the second inning when, with a runner on first base and no outs, Jon Niese threw ball four to Nelson Cruz, but neither the umpires nor the Rangers seemed to notice. Cruz struck out, and Niese cruised through the rest of the inning.

The upper part of the Mets' order produced once again in the top of the third. Harris reached on an error, Beltran singled, and on a ball hit back to the mound by Murphy, Alexi Ogando opted to throw out Harris at third base instead of throwing to second for what would have been an easy double play. The Mets took advantage of the mental miscue. Angel pagan flew out, but Lucas Duda doubled to bring home Beltran and Murphy, and Josh Thole singled to plate Duda, putting the Mets up six.

In the bottom of the inning, Niese made his only real mistakes of the game, yielding solo home runs to Adrian Beltre and Michael Young. The Rangers had gotten within four runs of the Mets, but that's as close as they would come this afternoon. Niese, however, was pulled from the game a couple outs later, and reports from the Mets indicated that he was taken out for precautionary reasons because of a rapid heart beat. Let's hope Niese is alright and was only feeling the effects of the Texas heat.

And then came the sixth inning. Ruben Tejada and Reyes singles to start the inning, and Harris hit another single to score Tejada. Reyes and Harris executed a successful double steal, and Beltran joined the single parade, scoring Reyes and sending Harris to third base. Murphy hit the fifth consecutive single of the inning to score Harris and move Beltran to second. Pagan then walked to load the bases, and Duda hit a double to score two more runs. There were still no outs in the inning.

Josh Thole then doubled to plate Duda, and after a ground out by Jason Pridie, Ruben Tejada hit a sacrifice fly to bring Thole home. The Mets had scored eight runs in the inning and held a virtually bullpen-proof twelve-run lead. On paper, the lineup this afternoon looked awful, but everyone in it reached base at least once.

Bobby Parnell and D.J. Carrasco combined to allow three runs over the final 3.1 innings of the game, but the Mets once again are one game under .500 and have a shot to get back to even for the four hundredth time this season when they play the rubber game tomorrow afternoon in Texas. 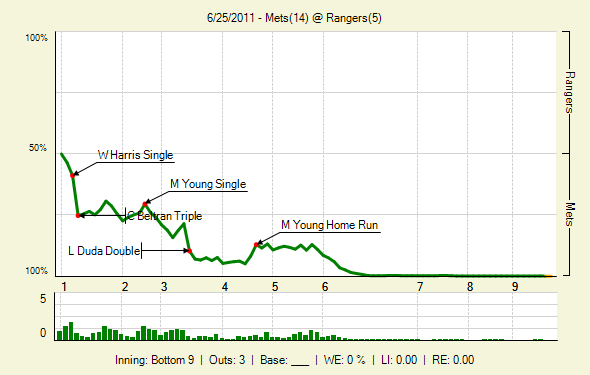