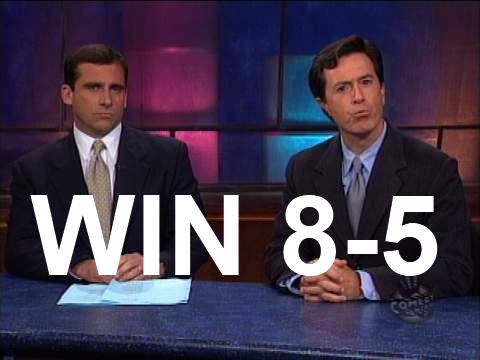 The Mets once again evened their record this afternoon as they defeated the Rangers, scoring eight more runs without hitting a home run and playing mostly excellent defense.

Jose Reyes singled to begin the game and stole second base early in the count. He didn't have an opportunity to move to third on Justin Turner's subsequent infield single to shortstop, but he advanced when Carlos Beltran flew out to right field. With runners on the corners, Derek Holland threw a pitch that ran inside to Jason Bay and got away from Rangers catcher Taylor Teagarden. Reyes scored easily on the play, but Bay and Scott Hairston each grounded out to end the inning. The Mets had an early one-run lead.

Dillon Gee could have fared far worse in the game, and the first inning was a prime example. Gee got two quick outs and allowed a solo home run to Michael Young to tie the game, which isn't the worst thing a pitcher can do. Three consecutive singles later, the Rangers had taken a 2-1 lead, and Gee then walked David Murphy to load the bases.

Gee then got some help from his defense. Teagarden came up to the plate and smoked a ground ball to Reyes' left, but Reyes somehow managed to snag the ball and was sitting down as he threw to second base to get the force to end the inning. The Rangers would have easily had two more runs if not for Reyes' play.

The Mets' bats were quick to answer in the top of the second. Ronny Paulino singled, and he easily went first-to-third on Daniel Murphy's single that followed. Angel Pagan then grounded to third baseman Adrian Beltre, and with Paulino breaking for the plate and out by a mile, Beltre's throw went wide of the plate, deflecting off Teagarden's glove and allowing Paulino to score standing up.

After a pop out by Ruben Tejada, Reyes lined a single to drive in Murphy. Turner flew out to right field, but Pagan and Reyes each tagged up to advance a base. It appeared Reyes was thrown out at second base, but the umpire called him safe so the inning continued. Beltran wasted no time taking advantage of the opportunity, singling up the middle to score both runners and give the Mets a 5-2 lead.

Both lineups were quiet until the bottom of the fourth inning, when Dillon Gee issued a leadoff walk and one-out single before Ian Kinsler hit a deep fly ball to center field. This time, Gee was bailed out by Pagan, who jumped to catch the ball just shy of the fence. Once again, the rangers would have easily had another pair of runs if not for the defense.

The Rangers did score in the bottom of the fifth, though, after Endy Chavez doubled to start the inning. Michael Young singled Chavez in to get the Rangers within two, and the threat continued when Turner made an error on a hard ground ball that most likely would have been a double play had he fielded it cleanly. Then Gee got some more help.

Nelson Cruz grounded to Reyes, who opted to try to get the out at third base, and Turner made like Willie Harris as he missed the bag with his feet and applied a tag in the force situation. His tag was late, but Turner got the benefit of another poor call by the umpires as the runner was called out. The help didn't end there. Mitch Moreland scorched a grounder down towards first base, but Murphy dove to make an outstanding play and threw the runner out at second. One routine fly ball later, Gee got out of the inning.

The Mets added a pair of very important insurance runs in the sixth. Paulino doubled, and although Daniel Murphy took a two-strike pitch right down the middle of the plate, it was called a ball by the home plate umpire. Murphy then flicked a double down the left field line to score Paulino. Tejada then singled, and the Mets had a 7-3 lead.

Gee's afternoon would have probably ended after the fifth if they Mets had not added that pair of runs, but yet again, he got some help from his defense. With no one out and runners on first and second, Turner, Tejada, and Murphy combined to turn a very nice double play before Gee got Endy to ground out for his final out of the afternoon.

Pedro Beato, Tim Byrdak, and Jason Isringhausen combined to retire six straight Rangers in the seventh and eighth before Jose Reyes, batting left-handed, drilled his fourteenth triple of the year into the right-center field gap. It was his fourth hit of the day, and Reyes continues to amaze.

Reyes eventually came around to score after Turner flew out to right, Beltran was intentionally walked, and Bay hit a ground ball so weak that the Rangers couldn't turn the double play they would have needed to prevent Reyes from getting home from third.

Despite the big lead, Terry Collins called upon Francisco Rodriguez, who has struggled of late and had only pitched twice since June 16, to pitch the ninth. Faster than you can say "K-Rod," the Rangers scored a pair of runs on a single by Andres Blanco, a walk to Kinsler, a double by Endy, and a Michael Young ground out. Fortunately, Rodriguez retied Beltre and Cruz to escape the inning, and the Mets had taken the series. 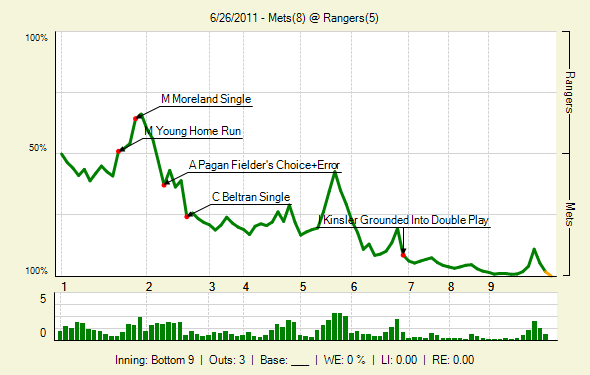 Nice job by MetsFans4Deacdes; her effort in the game thread embiggens us all.