Mets Prospect Mailbag: The (Past, Present and) Future of Second Base?

Share All sharing options for: Mets Prospect Mailbag: The (Past, Present and) Future of Second Base?

At the moment, Ruben Tejada is playing second base very well from a defensive standpoint, and is hitting well enough.  Justin Turner has shown that he can play second well enough, and...Daniel Murphy can play second and can hit the ball.  With three players on the 25-man roster who can play second, and "second baseman of the future" Reese Havens back on the field in AA, who can we expect to see at second base in the next few years, and what do you think will happen to whoever doesn't win the job?

This is an interesting and rather complex question that I've actually been pondering quite a bit myself lately. However, the only way to appreciate the future of second base is to put it into context with the less than stellar past:

Basically since the days of Edgardo Alfonzo the Mets have employed something of a mess at the keystone position. Not since Fonzie's 6.7 WAR Y2K campaign have the Mets had steady, valuable production from second base. I'm talking drek the likes of Jay Bell, Rey Sanchez, Kurt Abbott, Chris Woodward, Jorge Velandia, Alex Cora, Argenis Reyes, Ramon Martinez...all right I'll stop.

Take a look below at the Mets second baseman by WAR since 1999: (NOTE: Each year is color-coded by the player who logged the most innings at second for that season. However, the overall WAR figure reflect totals for any player(s) that garnered 100 innings or more.) 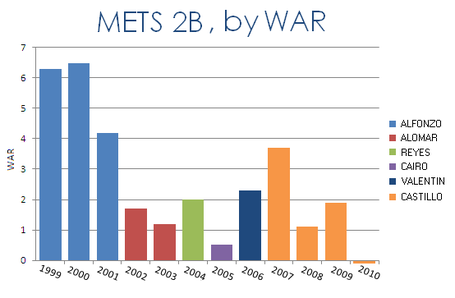 It's a pretty depressing climb down, with a brief respite from Luis Castillo v.'07 proving nothing more than a mirage, one which would haunt the Mets for three more slaptastic seasons.

With the exception of a few passable, yet brief, flashes in the pan -- namely Jose Valentin -- Omar's seemingly airtight strategy of acquiring the corpses of washed up old players didn't bear much fruit. And worse, when it actually did, he would typically overreact, press his luck by re-signing said corpse and subsequently get double-whammied. In fact, let's superimpose the average age of Mets' second basemen during this span: 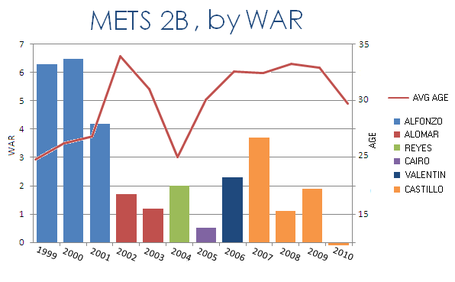 Pretty self-explanatory. And that's all I have to say about that.

Getting back to the question of the present, while the current second base situation is no less clear, there seems to be light at the end of the tunnel. First off, the team is now in the hands of a much more competent architect. I can't overstate that enough; sticking with the architect idea, this is like comparing Frank Gehry with the guy who designed my garage (and my garage sucks).

So let's look at these guys individually...

As the question posits, Ruben Tejada has been a nice little surprise at the dish this season after battling the Mendoza Line for much of last season. But that shouldn't be too much of a surprise, the guy was 20 years old when he was rushed to the majors last season so some development was to be expected. And that development showed up earlier this season with Buffalo.

Apparently then Farm Director Terry Collins left Tejada last fall with the directive to add some muscle in order to better drive the ball. And apparently Tejada took heed. The slight MI who had never hit more than five homers in a season had already hit three through 31 games with the Bisons and at the time of his call-up was posting an ISO (.140) well beyond his previous high (.092).

In his 30+ games with the Mets so far he's once again lived up to his billing as a sure-handed defender. However once again he's looked a bit punchless at the plate, delivering all but three of his 32 hits for singles. At that rate, Tejada would make a fine backup MI, but if that power develops -- and at 21 that's not unreasonable -- his nice glove and typically strong walk/contact rates fit the profile of a player like Asdrubal Cabrera (before the 2011 explosion).

Next up is Justin Turner, who entered the season as an afterthought but has suddenly thrown his hat into the ring. He was my ST pick after a 2010 Buffalo campaign where he batted .333 including a .906 OPS, two ten-game hitting streaks and a 6-for-6 game with a cycle to end the year. According to the MinorLeagueSplits.com's MLE calculator, his 2010 was equivelant to a .280/.329/.420 season with the Mets, not  too shabby and incidentally not far from what he's doing right now (though the bruised thumb hasn't helped).

He doesn't possess the glove of a Tejada but he's shown that he's a solid defender. In fact, just about every aspect of his game can be described as solid, though he doesn't really excel in any one area. Overall, Turner represents a solid, if unspectacular, option for the Mets at second, which after the last 5-7 years is a welcome sight.

Then there's Dan Murphy. We all love Murphy. But it's become clear that he is just not the answer long-term. Now his bat has been more or less the same as we remembered it: Good but not great, suspect against lefties, a shade less power thus far but nothing a nice hot streak won't cure. The bat isn't the problem, it's the glove. He subbed for the disappointing Brad Emaus admirably early on, but he just can't be counted on to play second day in, day out with other, better options defensively unless he's going to rake...which he hasn't. At this point, he seems best suited for the super-utility role that he currently inhabits.

That brings us to the minor league options. And obviously we have to start with the guy that's been the Mets 'second baseman of the future' since he was drafted back in '08, Reese Havens. As we all know, health has always been the issue for Havens because when he's on the field, he's produced. Aside from a good patience, Havens hallmark is excellent power from the left side, evidenced most recently by the six bombs he hit in the first 18 games of 2010 before he went down.

I will say that though he profiles as a 20+ hr guy from second base, I don't think he's the default long-term answer he once was. For one there are far more organizational options than just a couple years ago. And despite -- or maybe because of -- the power, he strikes out...a lot. I'm talking like 25-30% of his ab's. Pair that with generally low AVG's and there's still some risk here. However, if he reaches his offensive potential he'll push aside any of the other options. Currently he's batting about .250 with a couple longballs for Double-A Binghamton since getting healthy.

Finally, there's the hot name right now, Jordany Valdespin. Valdespin is interesting. He's been quite good this season for Binghamton, especially lately. Plagued by inconsistency and rawness coming into 2011, this year Valdespin is exhibiting the excellent mix of speed, power and all-around athleticism that has always made scouts drool. A .362/.413/.667 June has people excited as the toolsy MI is finally starting to harness all of his physical ability and a .313 BABIP means this may be for real.

The problem is that aforementioned rawness, in his game and in his temperament. He's been suspended by the org. more than once for inappropriate behavior marked by a foul temper. At the dish, his patience has improved but he's still striking out 3-4 times more than he's walking. And in the field, he betrays his athleticism with out-of-control play, marked by 16 errors in 2011. If he can continue to harness his athleticism he could be Jose Reyes-lite, the kind of player that affects every aspect of a game. If not, he may be the next Angel Berroa.

If you want some random guesswork, I'd say that once Wright returns, Turner claims the starting job as Tejada continues to work on his pop. I'm (blindly) assuming Reyes stays next year, so Tejada could claim the role back in 2012 thanks to his far superior glove if he continues to add muscle. However, by late next season if Havens hasn't forced his way into some ab's then something has gone wrong. Valdespin is too much of a wild card to say where he'll be, but keep this in mind: Even at his best he is pretty much the polar opposite of the current regime's favored model of a more refined hitter. So unless he really excels and forces their hand perhaps he's the one to pack his bags.

Either way, the Mets are suddenly in pretty good shape when it comes to what has been a perennial weakness. They have a number of very viable starting candidates, others who will represent excellent bench depth and still more who can be flipped. Each of these guys is either here or reaching the doorstep and all are on the lower end of that age spectrum meaning many cheap, cost-controlled years remaining.  While there may not be another Alfonzo in this bunch, there is certainly enough talent here to insure that the aging stopgap carousel has finally come to an end.