When the Mets called upon Francisco Rodriguez to pitch the ninth inning yesterday, SNY pointed out that he's been really awful in non-Save situations in 2011. Working with a four run lead, Rodriguez proceeded to Rangers to score two quick runs and get the tying run to the plate on deck before finally putting an end to the Mets' victory. His performance tied right into SNY's narrative about his use in non-Save situations.

The thing is that, much like many other splits in baseball (having blue eyes, for example), the numbers tend to even out once there is a large enough sample size. Rodriguez now sports an ugly 7.11 ERA in non-Save situations this season, but that's over a mere 12.2 innings pitched. In other words, it's basically useless.

Let's have a look at his splits over a much larger sample: his career. 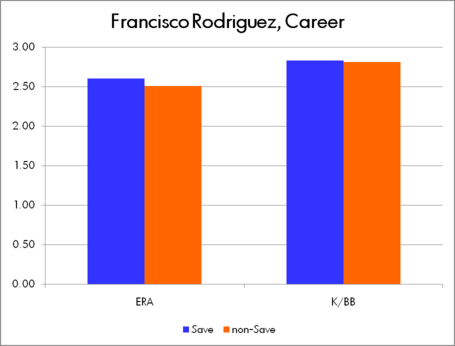 Rodriguez has thrown 240.2 innings in non-Save situations - 39.2% of the innings he has pitched in his career - and he's been nearly identical to the pitcher he is when a Save is on the line.

That means that innings like the one he pitched in Texas yesterday are pretty unlikely to happen no matter what the situation. It also means that if the Mets are looking to trade Rodriguez, he's going to be an excellent relief pitcher for another team even though they'll almost certainly use him as a setup man to avoid that vesting option.