Share All sharing options for: Mets 14, Tigers 3: All Kinds of Awesome 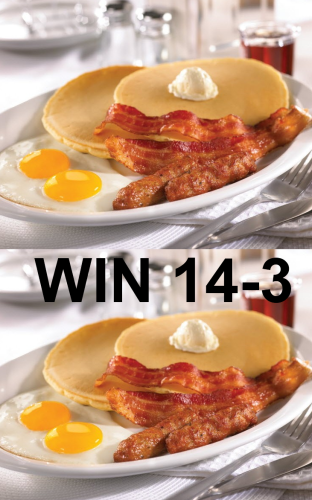 No matter what it is that you most enjoy about watching the Mets, there was plenty of it tonight. R.A. Dickey notched a strikeout on a knuckleball that registered at 59.6 mph. Jose Reyes continued his literally unbelievable season at the plate. The Mets hit a grand slam for the first time in nearly two years. Then they hit another one. Blowouts aren't often exciting, even when your team is in the lead, but this one was.

Jose Reyes got the game off on the right foot with yet another hit smoked past the pitcher. After two quick outs, Daniel Murphy doubled to easily score Reyes, and Angel Pagan doubled to score Murphy.

R.A. Dickey allowed three hits in the bottom of the inning, but thanks to a timely double play after the first of the three, he didn't allow the Tigers to score. Dickey's outing wasn't quite dominant, but he did some pretty awesome things over seven very good innings of work. There was the aforementioned slow knuckler, which struck out Brandon Inge to end the second inning, and the sneaky fastball on which Victor Martinez struck out looking with the bases loaded to end the third inning. He gave up a couple of home runs, but seven inings, six strikeouts, and three walks was more than enough tonight.

The Mets nearly added on to their early lead in the second inning with two outs and nobody on. Josh Thole singled, Reyes singled and stole second base, and Willie Harris smoked a line drive that would have easily scored both runners if not for a nice snag by Miguel Cabrera at first base.

Two innings later, the Mets didn't miss those two potential runs as they once again got started with two outs and nobody on base. This time, they didn't stop. Thole hit his first home run of the season to put them up 3-0. Then Reyes tripled. Again. Harris singled to bring him home this time, Beltran singled after that, and Murphy singled to plate Harris. Pagan then walked to load the bases.

The Mets hadn't had a grand slam in nearly two years, and Jason Bay's barely had any home runs since joining the Mets last season. So of course Bay hit a grand slam to put the Mets up 9-0. It seemingly took forever for the Mets to hit a grand slam, but their next one came in the very next inning.

Justin Turner walked to start the sixth, and after Thole made an out, Jose Reyes had another hit. This time, he nearly homered to left field but wound up with a double. Harris got hit by a pitch, and Beltran stepped up to the plate and hit the Mets' second grand slam in as many innings, prompting Gary Cohen to exclaim, "Holy Fernando Tatis!"

The Mets added a true insurance run in the eighth inning as Turner singled home Pagan, putting the Mets up 14-3 at the time. That would be the final score as Bobby Parnell and Manny Acosta pitched a scoreless inning a piece to end the Tigers' misery.

The Mets are a game over .500 for the first time in a long time. Jose Reyes had four hits, two of which went for extra bases, and reached base in all five of his plate appearances. And the Mets hit two grand slams while R.A. Dickey knuckleballed his way through seven innings. It was incredible.

Unintentionally sexual quote of the game: "He does not seem to like to go down. He hasn't done so yet." - Gary Cohen 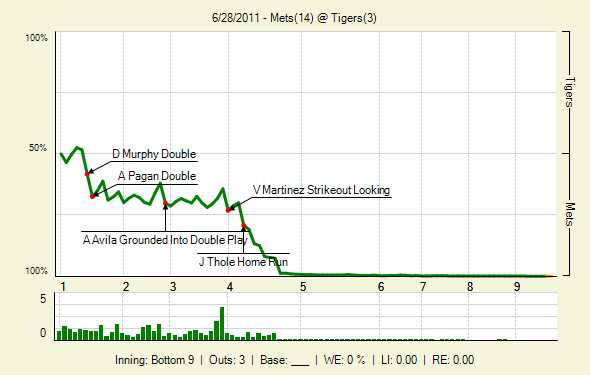