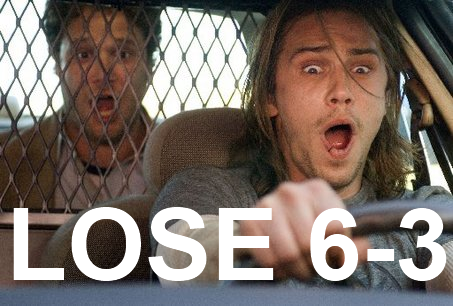 Jason Isringhausen and Francisco Rodriguez each had an ERA far better than his xFIP entering the game, and regression is cruel beast. In an inning and a third of work, the two pitchers allowed four runs to score, swinging the game from a one-run lead to a three-run deficit.

Before the game got ugly, Jon Niese was magnificent, allowing only two runs through 7.2 innings while striking out seven and walking only one. Needing 111 pitches to get through those innings, he was fairly efficient in his outing.

Niese allowed the first run of the game to score in the second inning when Joe Mather singled in a run with runners on second and third with one out. Luckily, the Braves attempted a safety squeeze with Derek Lowe at the plate, and it failed miserably as Alex Gonzalez was a dead duck between third base and home plate. Niese got Jordan Schafer out to end the inning without further damage.

The Mets' depleted lineup was making very good contact against Lowe early in the game, but they broke through in the fourth inning to score three. Thanks to a blown call by the umpire at third base, Jose Reyes was able to start the inning with a triple. Justin Turner grounded out, but Carlos Beltran drilled a single through the right side of the infield to score Reyes. Jason Bay didn't do any harm by drawing a walk, and Daniel Murphy and Angel Pagan followed up with an RBI single, and the Mets were ahead by two.

The score stayed that way until the top of the eighth inning when Chipper Jones led off with a monster home run to left field that hit the deck outside the Acela Club. Niese stayed in to record the next two outs, but he was pulled with Dan Uggla coming up to the plate.

Isringhausen was called upon from the bullpen, and he walked Uggla, he of the .241 OBP at the beginning of the day. Izzy then bounced a pitch for a swinging strike, but it got far away from Josh Thole, and Uggla advanced on the wild pitch. To top it off, Izzy got a ground ball to short that should have ended the inning, but it went right under Jose Reyes' glove, and the tying run scored.

Jonny Venters was Jonny Venters in the bottom of the inning, dominating three of the four hitters he faced, and Francisco Rodriguez's recent struggles continued in the top of the ninth. Eric Hinske hit a home run just barely over the right field wall between the Mo's Zone and the foul pole to put the Braves up a run. After a Martin Prado laser to left-center, Chipper Jones struck out, and the Mets chose to intentionally walk Brian McCann. Freddie Freeman drilled a double to score both baserunners, and the Braves were up 6-3.

Other than an Angel Pagan single in the ninth, Craig Kimbrel had no problem sealing the victory for the Braves, and Willie Harris fittingly struck out to end the game. His presence on the roster is mind-boggling.

The Mets lost another very winnable game this evening, and Sandy Alderson said after the game that David Wright's visit to the doctor today indicated that he needs to remain inactive for an additional three weeks. I'm not sure anyone believed that he'd be ready by the end of his original stint on the disabled list, but that's still very disappointing news.

There was a scary moment in the game as Jordan Schafer attempted to bunt in the top of the fifth inning but got a pitch inside from Niese and fouled it right into his face. He was able to walk off under his own power but was taken to the hospital for x-rays.

The series continues tomorrow evening at 7:10 pm as Dillon Gee takes the hill for the Metsies, and red-hot Jair Jurrjens starts for the Braves. 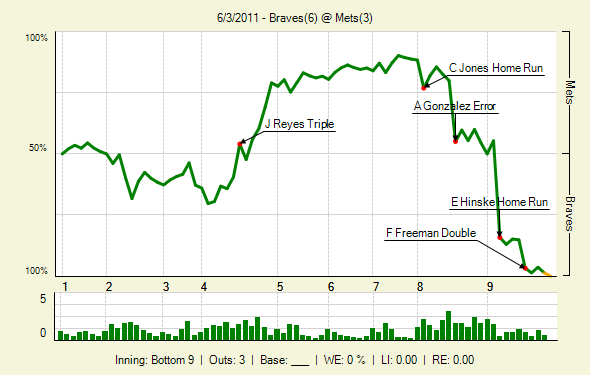