While Chris Capuano and Jose Reyes stepped up in Milwaukee in the Mets' 2-1 win over the Brewers on Tuesday, the national soccer clubs of Ecuador and Greece as well as their corresponding supporters' groups invaded Citi Field for the ballpark's first-ever professional soccer match and the first pro match in Flushing since 2003.

The match lived up to the expectations one would expect from an international friendly -- defensive tactics, lots of substitutions, glimpses of soccer brilliance -- en route to a 1-1 draw. The crowd was decidedly in support of Ecuador, with a visible sea of yellow engulfing more than two-thirds of the near-sellout crowd, but an early goal by Greece midfielder Alexandros Tziolis sparked the Galanolefki supporters into making some noise.

I attended Tuesday's match under the auspices of ESPN New York, but likely would have attended anyway for the novelty of the experience. I didn't know Shea Stadium had hosted soccer as recently as 2003, that Mark Clark blamed his poor outing in the 1997 home opener on a higher-than-normal mound that was rebuilt following a 1996 offseason friendly, that Pele played at Shea with the New York Cosmos, or that Shea's soccer roots stretched back to a 1965 exhibition tournament match featuring a 6-3 Portugesa upset of West Ham. Shea had soccer roots. Who knew?

(And yes, they removed the mound on Tuesday. Keep that in mind if the Mets starter on June 17 struggles upon the team's return home to face the Los Angeles Angels of Anaheim.)

Three national anthems, one goal, and one yellow card later, I took a lap of the lower level concourse at Citi Field alongside former Mets GM candidate and fellow soccer enthusiast Howard Megdal to take in the sightlines and sounds of the various points in the park. I peered into the Champions Club and quickly noticed something missing: 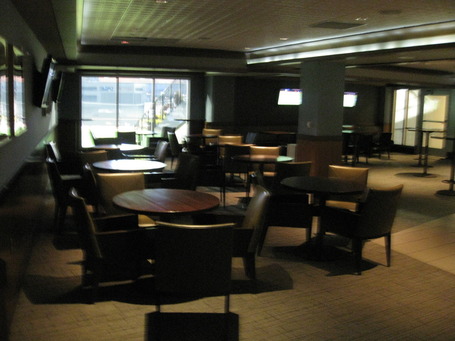 A hospitality attendant invited me in to look around as none of the clubs would enforce the entrance standards that socially stratify fans attending Mets home games. 39,656 soccer fans could take full advantage of the building's amenities and experience the previously-restricted eggplant parmigiana sandwich in the Delta Sky Club or have a drink in the Caesars Club without fear of expulsion.

It didn't matter. When the game was in progress, no one left their seats. There were no lines at the restrooms, the concession stands, the gift shops. The concourses were devoid of the folks you typically need to navigate through at Mets games. Soccer, of course, lacks the commercial break -- and the bathroom or hot dog break that often coincides with it in baseball. And these fans from Queens who presumably attend Mets home games with great frequency did not feel morally obligated to create a queue for a Shake Shack burger.

(Note: They did get up at halftime, though. Lines were everywhere for everything. If you're thinking of attending a future match at Citi Field, you should probably get going when the game enters stoppage time.)

Staying in their seats wasn't the only way to support the game in progress, though. 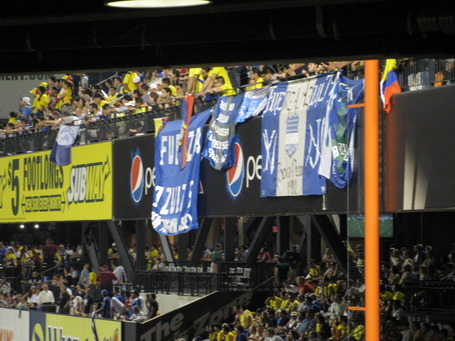 Homemade banners. The banners hung down without rhyme or reason, obstructing the Pepsi, Bob's Furniture, and others advertisements adorning every deck at Citi Field. It probably helped that Tuesday's match did not air on American television, but I found it amazing to see as my first-ever Mets game was the now-extinct Banner Day.

Immediately before the match, the audio booth belted out the "Ole" track that frequently supplements the cheers for Jose Reyes at Mets games. They followed it with the "We Will Rock You" chant shortly before the first national anthems were performed. After that, the soundtrack of the evening would be supplied solely by the fans in attendance and the drums, horns, and vuvuzelas they brought with them:

The awkward soccer seating arrangement didn't really cater to the supporters' sections you often see at European and South American matches. That the majority in attendance were American and probably weren't caught up on the latest supporters' songs and chants likely didn't help, but I kept looking around for a spot where the supporters could lead the crowd. Placing them behind each end, as they do in soccer-specific stadiums, doesn't work behind the east goal (a.k.a. Carlos Beltran's stomping grounds in right field) -- though could work at the other end (a.k.a. the third base side). And it's awkward to place them in an arbitrary part of the left field section, even if those were actually the best seats in the house for a change.

But don't worry, there were a few souvenirs to be had in the gift shop: 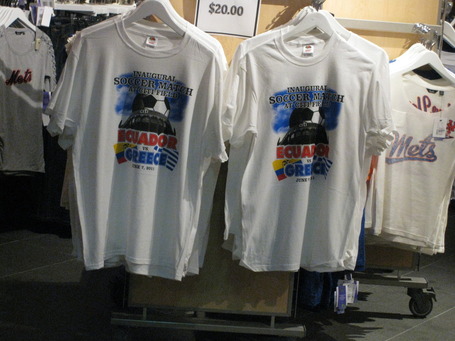 I only poked my nose in the Touch gift shop near the right field food court (which, again, was empty). Those t-shirts and these knick-knacks... 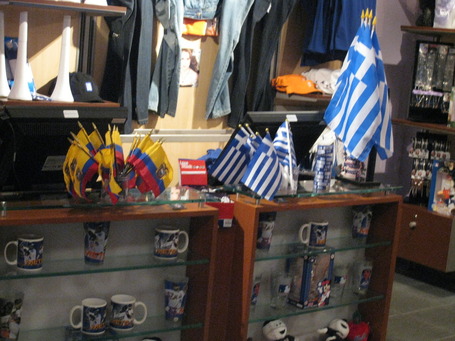 ...pretty much made up the extent of the relevant items for purchase. I would've expected to at least see scarves of each national side, but that's splitting hairs. I never expected to see the Mets' clubhouse shop be transformed into the World Soccer Shop for one night. And I imagine future matches will include wider selections. 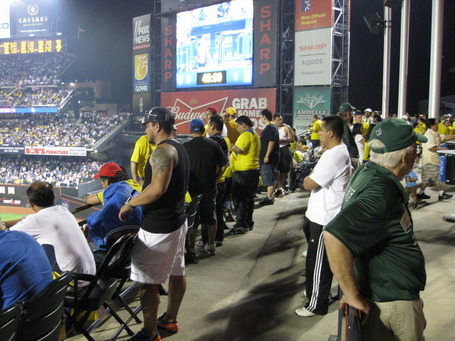 Of all the vantage points for Tuesday's match, I found the Pepsi Porch to offer the best experience. It was open air on an evening with perfect soccer weather, not too crowded but with enough of a population to keep your interest in the match. Actual seats at European soccer matches are still a relatively-new phenomenon, which probably added to the standing-room atmosphere as well. It just felt right. And the view... 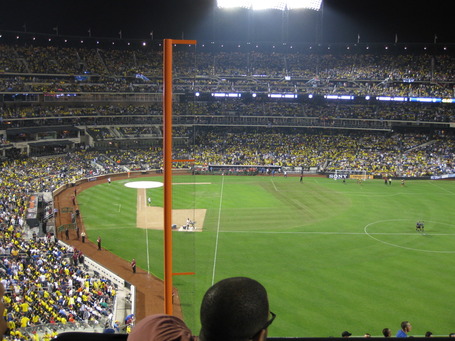 ...wasn't too bad, either. Though it should be noted that you could not see the east goal from the Pepsi Porch at all. I guess someone's view will always be obstructed at Citi Field.

While taking in the start of the second half from the Pepsi Porch, Howard asked, "So what does this all mean?"

What does it mean? It means Tuesday's match connected with the fans on a personal level without any attempts to shoehorn in an American interpretation of how sporting events should transpire.

Sure, there were obvious mistakes. They didn't televise the Gold Cup opening round match between USA and Canada on any of the monitors at Citi Field --  the Ecuador-Greece video was only available on select monitors for fans who dared to exit their seats during play -- in favor of keeping them all locked in to the Mets game. They put up a big "GOAL!" or "Yellow Card" graphic on the jumbotron for corresponding plays, but didn't add the names of the players or even the club involved.

Despite the shortcomings of folks who hadn't produced a soccer match in eight years, it all felt very energetic and, more importantly, democratic. Without the constraints of where you can and can't go as well as the blaring chants instructing you to SCREAM LOUD NOW!!! AAAHH!!! and it just felt like Shea used to feel.

Like you were there for the game and the game alone. And that there's plenty of hot dogs on the grill if you're hungry.

In deciding against allowing Mr. Met to roam about Citi Field during the match, Dave Howard, the Mets' Executive Vice President of Business Operations, conceded the decision to let soccer decide how the live game experience would play out. "Vuvuzelas, drums ... let's immerse ourselves in soccer and embrace the culture," Howard said to MLB.com.

That decision was a wildly successful one. And a teachable one for all future sporting events held at the home of our New York Mets.