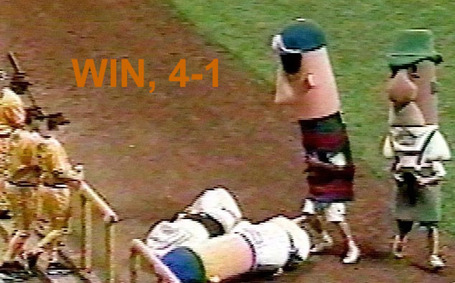 The Mets benched their highest-paid player (non-DL division). Jose Reyes went 0-for-5. They managed just one extra base hit all night, and bypassed more than a few scoring opportunities against a vulnerable bullpen. They also won, which, last time I checked, is all that really counts because that's why you play the game. (Just ask Herman Edwards.) And the main reason for that was Jonathan Niese, who turned in perhaps his most impressive outing in an already eye-opening year.

The Mets drew first blood against one of the hottest pitchers in baseball, Yovani Gallardo, winner of his previous six starts and one of the better pitchers in in the National League period. Alleged good-glove-no-bat Ruben Tejada hit a two-out RBI single in the top of the first to begin the scoring, and the Mets tacked on when Angel Pagan led off the top of the fourth with a triple and came in to score on a Jason Pridie sac fly.

As for Gallardo's counterpart, Niese was magnificent from the very start, tossing one knee-buckling curve after another. and retiring the first 11 batters he faced. His first blemish was a two-out walk to Ryan Braun in the bottom of the fourth, followed by a a long double to the right-center gap (where seemingly all hitters on both teams hit balls all series) by Prince Fielder that cut the Mets' lead in half.

Niese retired Casey McGehee to avoid further trouble, then his teammates came roaring back in the top of the fifth. Although "roaring" might not be the right word; it less a rally and more like an onslaught from an annoying brother who gets in your face and repeats "does this bug you? does this bug you?" Four straight singles to start the inning drove in two more runs and chased the surprisingly vulnerable Gallardo from the game.

As is the Mets' wont these days, none of the hits against Gallardo were all that hard hit (save Pagan's triple). However, they did succeed in running up Gallardo's pitch count, causing him to expend 96 pitches in just four-plus innings. For the hard-throwing righty, it was death by a thousand cuts.

The Mets ran themselves out of more runs when Daniel Murphy tried to score on a shallow fly to right and was thrown out by a healthy margin by Corey Hart. They also failed to capitalize on a pair of errors by McGehee in the eighth that put two baserunners on to open the top of the eighth. However, the way Niese was pitching, it didn't matter. The lefty cruised after Fielder's double, setting down Brewer after Brewer while barely breaking a sweat. It took him only 54 pitches to work through five innings, 62 pitches for six.

Niese did not face another jam until Milwaukee's big guns came around again. Braun led off the bottom of the seventh with an infield single, moved to second on a passed ball, and was joined on the bases shortly by Fielder, who received a free pass. But Niese knuckled down, inducing a long fly out from McGhee and a foul out behind the plate from Yuniesky Betancourt. He struck Jonathan Lucroy looking on a beautiful curve to snuff out a potential threat. For an extra slice of bad-assery, Niese began to stalk off the mound before strike three was called.

After getting the first two outs of the bottom of the eighth, Niese walked Rickie Weeks and surrendered a single to Corey Hart. That brought the meat of Milwaukee order up again, brought an end to Niese's night, and brought Frankie Rodriguez into the game for a four-out save opportunity. After getting ahead of Braun, K-Rod gave up an opposite field liner that Pridie--who seemed to get a bad read on the ball at first--somehow snagged at the warning track (and which I doubt the benched Jason Bay would have). Frankie also gave up a leadoff double to (who else?) Fielder to open the bottom of the ninth, but set down the next three in order (two by strikeout) to seal the win.

About the only bad thing you could say about Niese's outing was that he struck out four times and failed in two sacrifice bunt situations. Gary Cohen and Keith Hernandez contested that the dreaded Golden Sombrero can't be bestowed to a pitcher, because four strikeouts for a pitcher means four at bats, which further means you probably had a good day on the mound. What say you, reader?

But Mr. Niese is not paid to hit. He is paid to pitch, and pitch he did tonight, against a formidable Brewers lineup that easily erased a four-run deficit last night. This was also a Brewers team that had yet to lose a series at home, going an impressive 21-7 at Miller Field. The knock on Niese has always been that his ceiling was "only" being a middle-of-the-rotation guy. but considering how much pitching costs these days, even that is worth something. Tonight, it was worth a whole lot. 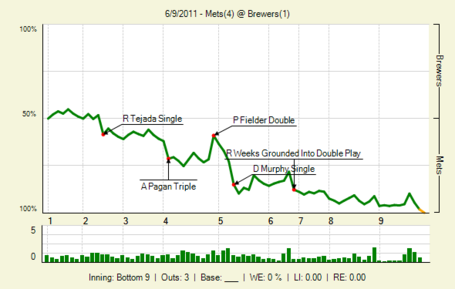