The 1975 All-Star Game, or: How Jon Matlack Won The Mets' Lone ASG MVP

Share All sharing options for: The 1975 All-Star Game, or: How Jon Matlack Won The Mets' Lone ASG MVP 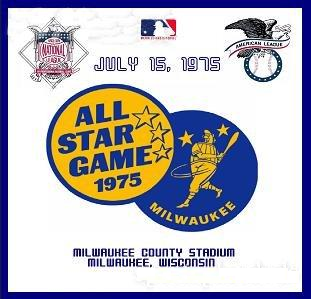 Somewhat misplaced amongst the legend of the Seavers and the Goodens lies one of the most effective, underrappreciated and all-around impressive pitchers to ever don the orange and blue, Jon Matlack.

The young southpaw from West Chester, Pennsylvania was a revelation from the moment he broke into the club's rotation in 1971 and after his masterful eight-inning, one-run performance to close that season -- in only his sixth career start -- the Mets could only muster three words when it came time to write a Yearbook blurb for the 22-year old lefty: 'Potentially another Koosman'. How right they were.

Matlack followed with a magnificent '72 campaign where he went 15-10 with a sterling 2.32 ERA that would land him among the names Seaver, Gooden and Strawberry as one of only four Mets to ever bring home the National League Rookie of the Year. He went on to post several more excellent seasons -- including a 7.4 WAR '74 -- cementing himself among Seaver and Koosman as the original 'Big Three', long before Mark Mulder or Barry Zito was around.

Matlack was also one of the countless pitchers who suffered thanks to the dinosaur mentality of Winzz First! when it comes to Cy Young voting. There is a real argument to be made that he deserved the award after his spectacular 1974 season, if not his rookie season as well.

In addition, Matlack also had quite a flair for the dramatic, excelling under the spotlight. His 1.40 ERA in four starts during the '73 playoff run -- including an eight and a nine inning shutout -- belies that point. It's no surprise then that as an All-Star Matlack was also excellent, posting a career 0 ERA in the Midsummer Classic. However, to be fair, much of that comes on the strength of his performance in the 1975 exhibition in Milwaukee.

And the beauty of that, for us Mets fans, is that this is one of the few interesting games archived by MLB.com that we can all watch...for free. Therefore, I suppose I can stop writing now, assuming each of you will surf over and appreciate Matlack's MVP performance for yourselves, live and in living color, so to speak.

However, for those that do not -- hummus-eating, non Flash-having Mac users! -- here's the box score as well as a cliff notes version of that day's events (with still images!): 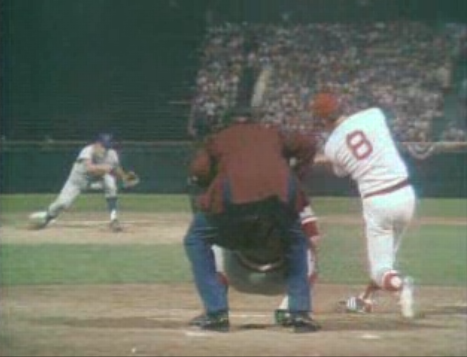 Oakland's Vida Blue -- one of six Athletics to make the trip -- started for an AL squad that boasted nine future Hall of Famers while Pittsburgh's Jerry Reuss started for the NL and their lowly and pathetic eight future HoFer's. However, back to back longballs to start the second from Jim Wynn and Steve Garvey -- one of six Dodgers on display; take that Oakland! -- helped the senior circuit take a nice 3-0 lead into the middle innings.

Those American League dogs would fight back though, against Tom Terrific no less. The Franchise wasn't as franchisely that night, learning to fear the name Yaz long before it become some kind of weird lady medicine. The long lefty strolled to the plate -- sans batting helmet -- and wasted no time, crushing Seaver's first pitch really, really deep to right center (pictured). I should point out that I'm pretty certain Yastrzemski was swinging a gd telephone pole. 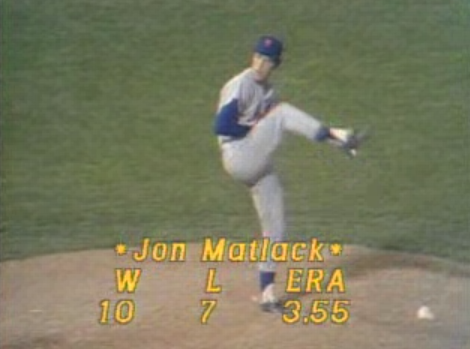 With the game tied at three and the AL suddenly wielding the momentum, legendary Dodgers Manager Walter Alston called for the 25-year old lefty from the Mets who came in and pretty much did his thing. Matlack stopped the AL in their tracks, pitching two scoreless frames, striking out four batters including Bucky Dent and Hall of Famer Rod Carew (pictured, below). 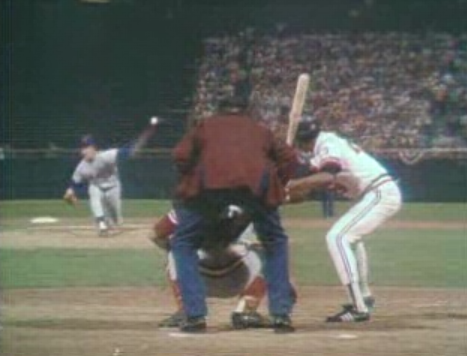 The only jam came in the eighth when speedster George Hendrick beat out a grounder to the right of the second baseman. After a fielder's choice, the baserunner advanced on a stolen base, then again on a passed ball by Johnny Bench. With the leading run standing at third base, Matlack bared down and blew a 1-2 pitch right past Boston rookie Fred Lynn.

In the following inning, Cubs third baseman Bill Madlock drove in what would be the game-winning run on a bases-loaded single and the NL would take it by the final score of 6-3. During the post-game ceremony, Madlock and Matlock were named the rather homophonic co-MVP's (pictured, below), thoroughly confusing random trophy presenter Henry Kissinger.

Matlack's performance that day garnered the Mets only All-Star Game MVP to date; same goes for Madlock and the Cubs (Side note: Is it not fitting -- for both of these franchises -- that the only year either won an ASG MVP was the only year it was ever split in half? Just saying).

For Matlack, it represented a great moment in a Mets career that was otherwise far too short. Like Seaver, Matlack eventually fell out of favor with management after repeatedly -- and accurately -- criticizing the organization's unwillingness to acquire offense through free agency. So after six seasons, with a career 3.00 ERA and an 82-81 record, the winter before Matlack was due to jump in salary, he was dealt to the Rangers -- reportedly by Manager Joe Torre no less -- in a four-team deal that netted the Mets back Willie Montanez and Tom Grieve. So basically next to nothing. The next year Matlack would go on to have the best season of his career, winning 15 games and posting a 2.27 ERA in 270 IP. Go Mets!

Currently, Matlack is the minor league pitching coordinator for the Detroit Tigers.