Share All sharing options for: Transcript Of Justin Timberlake Trolling Joe Buck On Live Television During The All-Star Game (Now With Video!)

During tonight's All-Star Game, Fox cut away to a sideline interview with Justin Timberlake, star of the upcoming film Friends With Benefits. Most of the time these types of interviews are banal, "tell us about your movie" borefests. But Timberlake had other ideas. He heaped what had to be sarcastic praise on FOX announcer Joe Buck, barely broaching the topic of his upcoming film release. Timberlake was holding a gigantic beer throughout. It's a first ballot lock for the IRL Trolling Hall Of Fame. Here is a transcript of the exchange which took place during the top of the fourth inning. The players are Timberlake as troll, Buck as trollee, Mark Grace as hype man, and Tim McCarver as proud Memphis homeboy:

Joe Buck: We go down for a visit with a special guest, here's Mark Grace.

Mark Grace: I'm down here in the pool area, with the star of the upcoming comedy, Friends With Benefits. Welcome Justin Timberlake, how ya doin' brother?

Justin Timberlake: -with a classy voice.

Mark Grace: It's your first All Star game?

Mark Grace: Did you ever think you'd be at a swimming pool?

Justin Timberlake: When they said ‘we want you to go down there and be interviewed by the pool' I said ‘excuse me'?

Mark Grace: Why don't we come over here and get a shot of the pool. 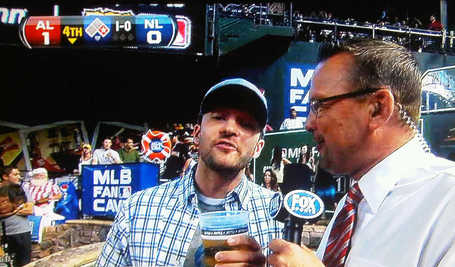 Mark Grace: Really? Beer! It's kind of the perfect food.

Justin Timberlake: It goes with the hot dog, it goes with nachos, it goes with peanuts. Beer's perfect. Beer never got mad at me because I didn't call beer back.

Joe Buck: Gracey, ask him if his movie is any good.

Mark Grace: Joe wants to know, is your movie any good?

Justin Timberlake: He's a classy guy, that Joe. And you're calling a great game!

Mark Grace: Do you have anything to say to Tim McCarver?

Justin Timberlake: We're big fans of you in Memphis, Tim.

Mark Grace: You're also a big baseball fan, a Los Angeles Dodger fan, is that correct?

Justin Timberlake: I am a Dodger fan, yeah, my dad got me into the Wrecking Crew. My favorite baseball player of all-time is Orel Hershiser.

Mark Grace: Sorry Eric, I tried man. Hey Justin thanks a lot, best of luck to you. Let's throw it up to the guys!

Joe Buck: Really appreciate it and it's said with such sincerity.

The tone in Timberlake's voice added to the moment but it's tough to convey here. And hat tip to Mark Grace for facilitating it all with his "I hear ya bro!"-type sentiments. We'll see if MLB allows any video of it to remain on the Internet.

Apologies to any Joe Buck fans out there but what goes around, comes around. Buck has stated in the past that he "barely watches" any sports and when he announces baseball games "it's just not as special and unique as it used to be...that's just the way it is." Combine his disinterested demeanor with comments like that and it's hard to conclude he's in it for anything other than a paycheck. Find someone who cares, FOX.

We have video of the interview, via MLB.com: