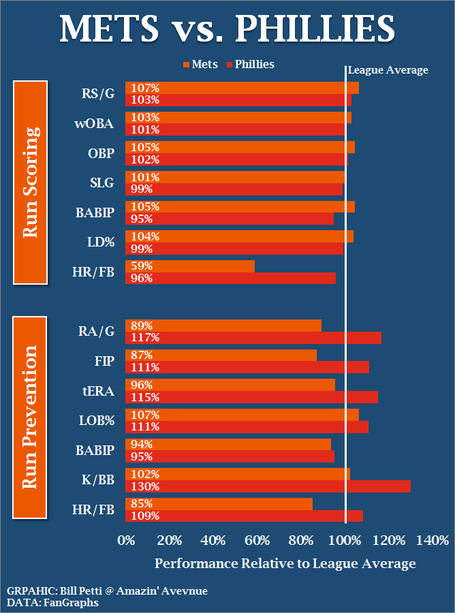 The story is much the same as when the Mets and Phils last met. The Mets have had an equal, if not slightly better, offense this year. What's most striking is that the Mets are scoring as much as they are without the benefit of lots of home runs and the Phils are a little less than league average in this category.

However, on the run prevention side of things the Phillies' clearly dominate. The currently health big-three of Halladay, Hamels, and Lee have been tremendous. Even without Oswalt, the Phillies pitching staff has continued to dominate opposing hitters. Their starters have accounted for 15.4 Wins Above Replacement this season. If you get to the bullpen you have a chance, but the Phillies tend to let their starters throw deep into games (11 complete games this year).

The Mets miss Halladay, but will see Lee and Hamels. I predict the Mets win one game, with a 30% chance of taking two out of three.