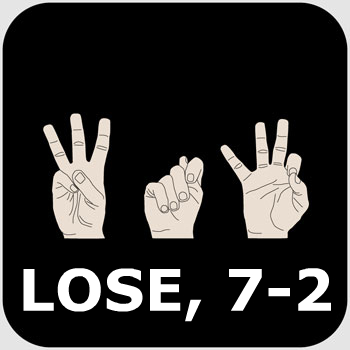 This was a downer of a game. After an era of good feelings All Star break featuring Carlos Beltran starting the Midsummer Classic, Perp-Rod's extradition to Milwaukee and Joe Buck getting served on national television, the Mets came out flat against the hated Phillies. Neither Roy Halladay nor Cliff Lee are scheduled to pitch in this series, so tonight looked like a nice opportunity to pull a fast one on the division leader. But it was not to be.

Vance Worley held the Mets' lineup in check in 5.1 innings of work, giving up one run on three hits. Four Phils relievers combined to pitch 3.2 innings, allowing just one run. Help us Jose Reyes and David Wright, you're our only hope. R.A. Dickey struggled in the early-going, allowing three runs in the second inning on a smattering of singles and walks. He surrendered only a Raul Ibanez solo home run sixth inning thereafter. Dickey had a great "perception vs. reality" game. It seemed like he was off all night, faltering with his control, committing a balk and generally not looking all that hot. Then you look up and he's just finished the seventh inning with a respectable line (7 innings, 6 hits, 4 runs, 2 walks, 5 strikeouts).

The Phillies blew the game open in the eighth inning, with help from defensive miscues by Justin Turner and Ruben Tejada. They led to three unearned runs, all plated on a John Mayberry bases loaded double off Ryota Igarashi. It made the game 7-1 and extinguished any realistic hopes of a comeback.

Carlos Beltran went 1-for-2 with two walks and a bomb solo home run to center field. TRAID value: rising. Mets playoff chances: falling. I understand that fans don't like the idea of "giving up" on a season when the Mets are still mathematically in it. But the team is not catching the Phillies. They are 8.5 games out of the Wild Card lead. It's not reasonable to plan for a playoff run. "Remember 1973? Anything can happen!" is not a way to run an organization. It will feel pretty silly if Beltran is still on the team come September 28, with the Mets finishing up 82-80 and nothing to show for their departing superstar.

Here is a cool shot of the postgame fireworks show:

Game two of the series is Saturday at 4:10 PM. It can be seen on FOX. The pitching matchup is Jon Niese vs. Cole Hamels. 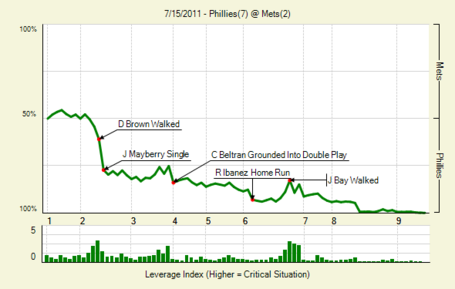