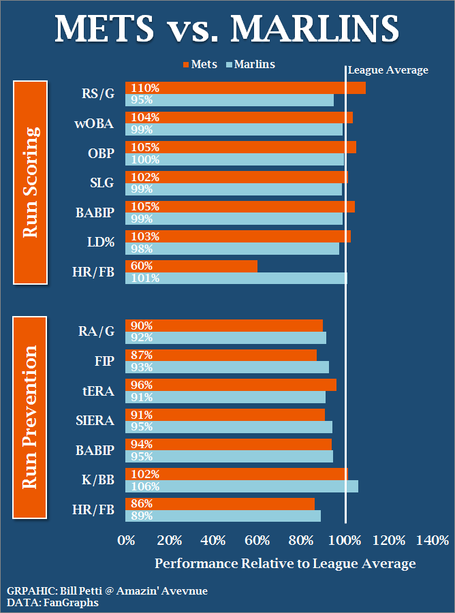 Both teams have similar run prevention profiles, although the Marlins were thought to have a stronger pitching staff heading into this season. The loss of Josh Johnson for much of the season has certainly been a major factor.

The Mets have the advantage offensively. Even without three of their core offensive weapons (Jose Reyes, Ike Davis, and David Wright), the Mets are still scoring at about 10% above the NL average.

I predict the Mets win the makeup game tonight and then go to Florida and take three out of four. In nine games against the Marlins, Chris Capuano has an OPS+ against of only 73 (4th lowest against any opponent). Horribly small sample size, but I'll leverage it to the hilt as the basis for predicting that Capuano can beat the Marlins twice in one week.

Be sure to check out Fish Stripes for news and commentary on the Marlins.