Have I mentioned I hate the Marlins? I really, truly hate them. Ever since I witnessed the Marlins beat the Mets on successive final games of the season in 2007 and 2008 to end their playoff hopes, I hate them forever and ever amen. The 2008 finale was particularly painful, watching the Marlins celebrate like a Little League team on Shea's sacred ground, knowing it was the last game that would ever be played there....good lord, it burns me up just thinking about it.

There have been times in my life when I thought I hated the Braves, the Yankees, the Phillies, whatever random team the Mets happened to be losing to at the time. But no, the Marlins are the one and only team I hate, with a capital $*&$%*&%$. They are the only one I actively wish bad things to happen to (purely competitively, I mean; I'm not a monster). When their manager quit mid-season and they went 0-for-June, I drank deeply of the schadenfreude. Tonight's game was exhibit Q in the case against.

Chris Capuano cruised through the first 3 2/3 innings, allowing just one baserunner, and that coming on an inexplicable walk of the opposing pitcher. But with two outs in the top of the fourth and Hanley Ramirez in a 1-2 hole, he gave up a bloop single.The lefty unraveled a bit after that, ceding a walk to Gaby Sanchez, and following that with a first-pitch double to Mike Stanton that plated two runs. Then old friend Mike Cameron put in a tough at bat before singling to left, bringing in Stanton and making the score 3-0 Marlins.

With Jose Reyes and David Wright still rehabbing, and Carlos Beltran still dealing with the flu, this game featured a Mets lineup seriously lacking in punch. It lost even more of it when Scott Hairston left the game after fouling a ball off his leg. Still, the opposing starter was Clay Hensley, only recently recovered from injury, last seen as a reliever, and making his first start since 2008. The type of pitcher that even a replacement-level lineup should be able to get to for something.

So naturally, Hensley limited the Z-Mets to one hit in his infuriatingly effective five innings of work. The Mets did not get their second base hit until the bottom of the seventh, when Nick Evans (who took over for Hairston) led off with a single against reliever Mike Dunn, and he was quickly erased when Lucas Duda grounded into a double play. After a walk to Jason Bay (yes, Jason Bay got on base tonight), sleepy bullpen arm Edward Mujica struck out Ronnie Paulino to end what qualified for a threat in this game.

Even at their worst this year, the Mets' lineup has managed to at least be patient, but we saw an almost total lack of that in tonight's game. As a team forced into an impromptu road stop, one would expect the Marlins would come out flat and uninspired, and yet it was the Mets who looked like a team with 25 waiting cabs outside.

Speaking of lack of patience, one sideshow of the evening involved Hanley Ramirez. After grounding out to lead of the top of the sixth, Ramirez took his sweet time trudging back to the dugout. He spent the rest of the half-inning working on his swing, seemingly ignorant that his teammates were no longer batting. The bottom half could not start until Ramirez deigned to assume his position.

This led to a lengthy discussion between Keith Hernandez and Gary Cohen about whether a talent like Ramirez's should excuse excess baggage. You can probably guess where Keith stood on this issue. As for me, there are definitely players whose attitude or style can be irksome, guys who stare at their own home runs or don't seem to care about their defense or pump their fists after protecting a six-run lead in the seventh inning. But I can't think of a player who seems more resolutely selfish and less team oriented than Hanley Ramirez. I can't even imagine how Ramirez would be received if he played for the Mets, served by a media that has accused players like Reyes, Beltran, and Carlos Delgado of being bad clubhouse influences. And frankly, when you consider his play the last two seasons, such diva behavior is not only grating, it's also unearned.

Also, after home plate "umpire" Angel Hernandez made a hideous "you swung" call on Ruben Tejada in the eighth (not that it had any effect on the outcome of the game), Keith accused him of wanting to speed up the game, reminding him that Smith and Wollensky is open all night. This, according to Keith, is where all the umpires eat. Gary wondered if umps might prefer the Meat Packing District, and the line of conversation very briefly threatened to get even weirder than before.

Oh, the rest of the game? Capuano retired the Marlins with little effort in the fifth, sixth, and seventh, but ran into some more trouble when he tried to get through the eighth. A leadoff hit from Emilio Bonifacio was followed by a sac bunt, a steal of third, and an RBI single from Gaby Sanchez (though he was thrown out trying to leg out a double). An infield single from Ramirez finally chased Capuano from the game.

Pedro Beato came on to get the final out of the inning, and Ryota Igarashi set the Marlins down in order in the ninth, for all the good it did. The Mets went quietly against Mujica in the eighth. They got a brief shot in the ninth when the wildness of Randy Choate loaded the bases, but they could only manage an RBI sac fly against closer Leo Nunez. Ronnie Paulino ground out to put the Mets out of their misery.

Perhaps the worst part of this game's outcome--worse than dropping the Mets below .500 again, worse than further  dimming the hopes of mad fools who think this team could do something--is the fact that it made the Marlins announcers happy. Yes, the Marlins announcers, the worst ones in baseball by an astronomical margin. And before you mention John Sterling or Hawk Harrelson, watch this and tell me I'm wrong to want these people to be miserable. 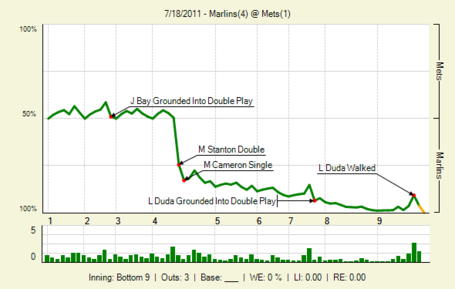