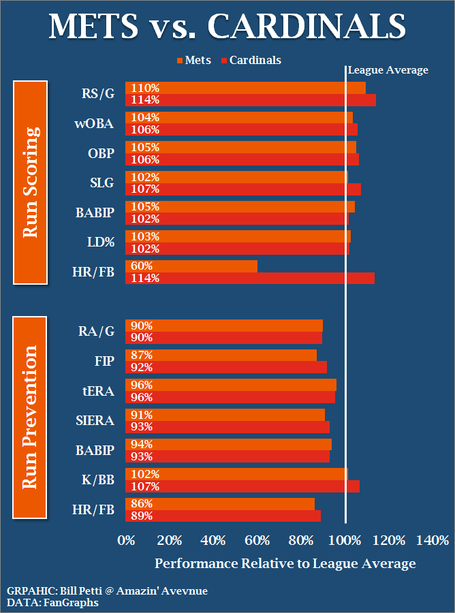 St. Louis is currently tied for second place in the NL Central with the Milwaukee Brewers, half a game behind those preseason favorite Pirates (I kid, I kid). The Cardinals have mostly done it with offense so far this season, as their run differential is largely dependent on an offense that is scoring 14% more runs per game than league average. In fact, their expected record based on their run differential is identical to their actual record.

The Mets' expected record, on the other hand, is 49-46. They've been quite similar to St. Louis in that their run differential is also heavily dependent on their offense. The biggest difference is home runs. The Mets remain largely under league average while the Cards are well above (not Yankee above, but still).

The Mets will miss the Cardinals' top two starters (Garcia and Carpenter) and get to roll with arguably their three best this year (Gee, Dickey, and Niese). Moreover, it appears that the offense will get both Jose Reyes and Carlos Beltran back tonight.

I'll be optimistic and predict the Mets win this series.

For more on the Cardinals, check out Viva El Birdos.