With Carlos Beltran and Jose Reyes back in their lineup, the Mets had plenty of opportunities to score runs against the Cardinals. Although they wound up leaving a ton of men on base, they did manage to bring a few runners home and beat the Cards.

Dillon Gee allow only three hits in seven innings of work, but he allowed the first run of the night in the fifth inning. He walked Lance Berkman with one out and then misplayed a chopper up the middle off his glove, allowing David Freese to reach first base with what was deemed a hit, the Cardinals' first of the game. One out later, Kyle Lohse hit a grounder up the middle that found its way past Gee and the diving Justin Turner to score Berkman.

The Mets did not take long to answer the run. Through the first four innings, they were making great contact off Lohse, but they were getting clobbered by BABIP as nearly everything they hit went right to a St. Louis defender.

In the fifth, however, they finally broke through. Jose Reyes and Justin Turner each singled, and Carlos Beltran walked to load the bases with nobdoy out. Daniel Murphy hit a line drive about as hard as a human being can possibly hit a line drive, but it was hit directly at Ryan Theriot at short. Murph screamed into his helmet as he walked back to the dugout.

Angel Pagan came up next and hit a long fly ball to the Mo's Zone that sailed over the head of the flailing Lance Berkman in right field. Reyes and Turner scored, and the Mets had the lead. That was it for the scoring, though, because Jason Bay struck out, and after a Lucas Duda walk, Ronny Paulino lined out softly to end the inning.

The Mets added what would turn out to be a pair of crucial insurance runs in the sixth inning. With two outs and no one on base, Turner singled, Beltran walked again, and Daniel Murphy got another chance. With two strikes, he hit a long double that one-hopped to the wall in left-center field, putting the Mets up 4-1.

Dillon Gee made it through the seventh inning, allowing a solo bomb to the foot of the Shea Bridge to Berkman but retiring the other three batters he faced.

Then came Bobby Parnell, who made things unnecessarily thrilling by loading the bases for Albert Pujols with one out in the eighth. Pujols grounded up the middle, and Jose Reyes turned an outstanding 6-6-3 double play to end the inning. In four trips to the plate in the game, Pujols made six outs. That's not something you see every night.

The Mets didn't score in the eighth, but Beltran, playing in what could be one of his last home games as a Met, singled to reach base for the fifth time in as many attempts.

Jason Isringhausen got the call in the ninth and closed the victory with ease.

With the win, the Mets are once again back at .500. The second game of the series is tomorrow at 7:10 pm, and R.A. Dickey will be on the mound for the Mets, while Kyle McClellan gets the nod for the Cards. 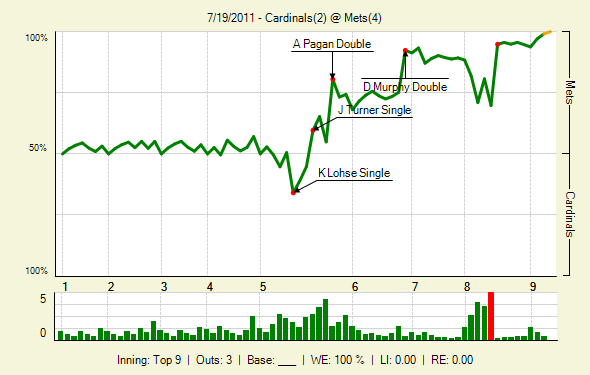