Trading Deadline Musings: Who Have the Mets Traded With and When?

Share All sharing options for: Trading Deadline Musings: Who Have the Mets Traded With and When?

With all the trade rumors swirling, it might seem like all teams in the major leagues trade with all the other teams all of the time. At least, the rumors seem to encompass most of the players on most of the teams in some capacity or another. "Their best player for our worst prospect" might be the rallying cry of the season. Once the deadline passes, we'll all remember really quickly how rare a high-profile trade is. They just don't happen that often, right?

Now Baseball-Reference has given us a great new tool that can help us quantify exactly how rare trades are. This tool allows us to see all the trades that two teams have ever completed with each other in their history. It's fun.

A useful application seemed to be a quantification of trade tendencies. Who have the Mets traded with most? Least? And how long has it been since the last trade with a franchise? Below the jump you'll find some answers.

In order to get around the expansion issues, trades are listed as a yearly rate. The denominator is the number of years that both the Mets and the trading franchise have been in the league at the same time. Also, only trades were counted, not purchases. We'd like to know about the number of times a team was actually willing to swap players with the Mets. 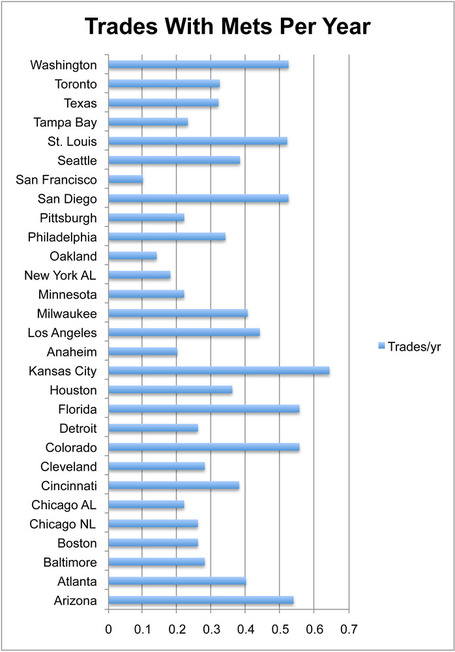 There's not a whole ton we can do with this. Well, except call the Royals and ask what's up. Cause in almost two out of every three years, the Mets and Royals hook up. Maybe there's something about struggling teams with good farm systems in here. The Royals, Diamondbacks, Rockies, Padres and Expos/Nationals could all be described as such. The Mets have often been buyers, and those teams have often had young prospects waiting in the wings to replace the players they trade away.

It's also interesting that the Giants and Mets have not completed many trades, but does that make it any less likely that they complete a deal going forward? There have been different leaderships in charge all along, and it seems like folly to ascribe this to the cities rather than the actual personalities involved. As in, it might be true that Omar Minaya and Brian Sabean didn't have a great working relationship, but that doesn't say much about Sandy Alderson.

What we can inspect is the team's tendency to avoid trading within the division. The average trades per year with a team is .35, which actually seems like a lot. That means that the Mets make ten trades per year on average. Since so many are low-level trades, our idea that teams don't like to trade within the division probably has more to do with the profile of the players involved rather than the actual number of in-division trades. Other than Philadelphia, the Mets have completed more than .35 trades per year with every team in their division. Perhaps what this means is that the Mets would trade with a team in their division if that team wasn't competitive, since the Phillies have been the winningest team in the division other than the Braves. Certainly seeing that the Washington/Montreal franchise is a top-six trade partner points in that direction.

A stronger effect can be seen with the Yankees. Even if you correct for the difference between the American and National Leagues -- the Mets have averaged .43 trades per year with NL teams and only .27 trades per year with AL teams -- the Yankees are a rare partner. They only complete a trade with the Mets about once every seven years. Also, not only are they a bottom-three trade partner in terms of volume, but it's been a long time since the last trade with the Yankees. Mike Stanton for Felix Heredia in 2004. 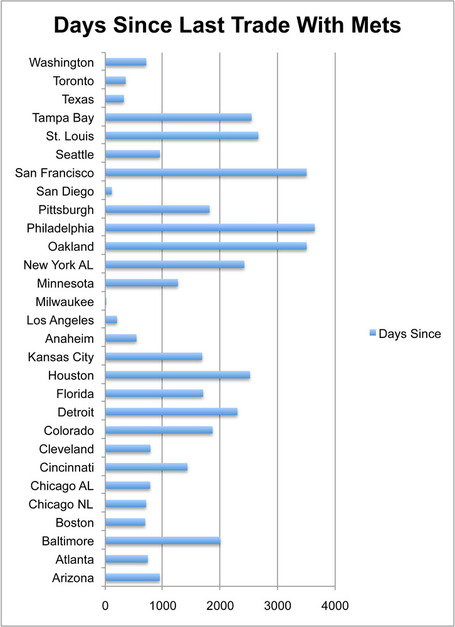 Either way you dice it, the Mets don't seem to love trading with the Yankees. But there are the Giants again. Maybe Brian Sabean is a difficult trade partner, and maybe there won't be a Carlos Beltran trade to the west coast. The fact that the second-most cited team in the Beltran rumors is Philadelphia also seems funny.

Perhaps it's all just one big cycle. Send Jason Isringhausen to San Francisco and Carlos Beltran to Philadelphia and suddenly Oakland is our least likely trade partner. And that would be a shame because that organization has traded away some interesting young talent in recent years.