Share All sharing options for: Mets 6, Cardinals 5: Just Enjoy It

Perched atop right field in the Pepsi Porch, Ron Darling summed up what could possibly be Carlos Beltran's final days as a New York Met perfectly: "Just enjoy it." If this turns out to be Beltran's last home stand, he's going out with a bang.

The game did not get off to a good start. Tony La Russa, also known as the most annoying baseball manager on the planet, decided to play small ball in the first inning after Skip Schumaker began the game with a double down the first base line. Jon Jay bunted him over, and Matt Holliday hit a routine fly ball to center field that was deep enough to plate Schumaker. The Cardinals had an early run.

For the first couple of innings, the Mets' bats looked inept against the mediocre Kyle McClellan, and in the third inning, R.A. Dickey got into quite a bit of trouble. McClellan and Schumaker singled to begin the inning, and after a knuckler got by Josh Thole, Jay grounded out to bring the opposing pitcher home. Holliday followed that up with a double to score Schumaker, and Lance Berkman singled to bring Holliday home. It looked like an awful night was in the works for the Mets, but Dickey got out of the inning with the Mets down only four runs.

In the bottom of the third inning, the Mets wasted no time in making it a ballgame. Lucas Duda singled to begin the frame, and Josh Thole doubled to easily score the not-so-quick first baseman and get the Mets on the board. R.A. Dickey then singled through the left side of the infield on a grounder that was slowed by Cardinals' shortstop Daniel Descalso, and Thole was able to score without issue. Saint Louie's lead was cut in half.

The score remained the same until the bottom of the fifth inning, when Dickey led off the inning with another single. Jose Reyes grounded into a fielder's choice, and Justin Turner struck out to bring Beltran to the plate. Beltran worked the count full before applying his signature left-handed swing and hitting a no doubt home run into the Pepsi Porch, just a few feet away from Gary, Keith, and Ron, to tie the game. If you weren't having flashbacks to Beltran's incredible home run against the Cardinals during the 2006 regular season, you weren't a Mets fan in 2006.

Neither team scored in the sixth inning, but things got interesting in the top of the seventh. Descalso singled to start the inning and advanced to second base on an error by Angel Pagan. After a sacrifice bunt to move him to third, Terry Collins pulled Dickey from the game in favor of Tim Byrdak. Two lefties were due up, but La Russa opted to send Tony Cruz, a righty, to the plate. Byrdak threw one pitch, and Cruz grounded out to Reyes, keeping the runner at third base.

La Russa then turned to Albert Pujols to pinch hit, and Collins countered by calling upon Pedro Beato. It was Beato who made Pujols look overmatched, quickly getting ahead of the living legend to the tune of an 0-2 count before getting Pujols to pop up weekly to first base to end the inning.

The Mets didn't score in the bottom of the inning, and in the top of the eighth, it looked like things were about to go wrong again. Bobby Parnell was on the mound for the Mets, and in a very good at bat, Holliday singled to start the inning. On a fly ball just shy of the warning track in left field by Lance Berkman, Holliday tagged up and reached second base with ease. David Freese grounded out, but Holliday moved to third base. Parnell intentionally walked the struggling Colby Rasmus, and then La Russa got even more annoying than he usually is.

Gerald Laird put down a safety squeeze bunt, resulting in a single that allowed Holliday to score easily. Although the play itself cannot be criticized, it epitomized the annoying essence of Tony La Russa. Parnell escaped the inning without further damage, and then the Mets came back once again.

Angel Pagan reached base on an error as he led off. Thanks to a full count to Willie Harris, Pagan was able to move to second on what would have otherwise been a tailor-made groundball double play by Harris. Pagan advanced to third on another ground out by Duda, and La Russa, who had been leaning on the young Lance Lynn, chose to go to Jason Motte as Josh Thole stepped up to the plate. It didn't work.

Thole hit a very-Josh-Thole single through the left side of the infield, and the game was all tied up for the second time.

Jason Isringhausen and Fernando Salas each pitched a scoreless ninth inning, but only Izzy pitched a scoreless tenth. With one out in the bottom of the tenth, Angel Pagan hit a solo home run of the facing of the Pepsi Porch, just shy of Keith Herandez' glove in the first row, to win the game.

The Mets moved to a game above .500, and they've already won the series with the Cardinals. They go for the sweep bright and early tomorrow with Jon Niese on the mound and Jake Westbrook getting the start for St. Louis. That's a very desirable pitching matchup.

Unintentionally sexual quote of the game: "The Cardinals are a two-out base hit from getting a nice little bulge there." -- Keith Hernandez 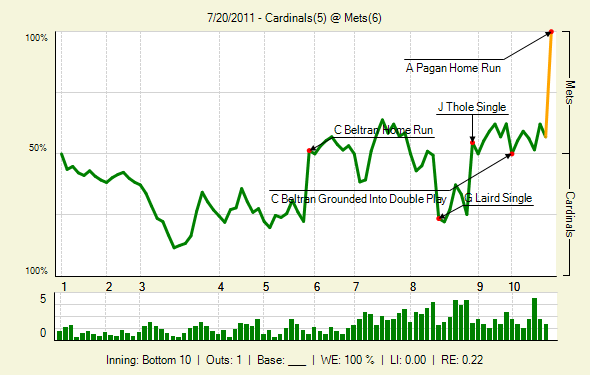