A Look at Met Hitters and their Volatility this Season

Share All sharing options for: A Look at Met Hitters and their Volatility this Season 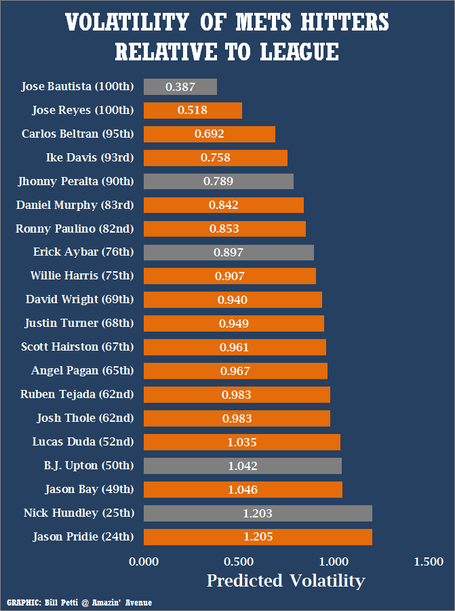 For those Amazin' Avenue readers that also peruse Beyond the Box Score, you should be familiar with the series I've been writing on Volatility*. More specifically, I've been exploring the extent to which we can measure and explain why some hitters seem to perform on a more consistent basis than others. The entire question started with an examination of whether David Wright had become progressively "streakier" over time. The research and concept has evolved quite a bit since then, however.

In my latest installment, I identified the four variables that seem to explain Volatility (wOBA, ISO, K%, and BB%) and noted how to estimate a player's Volatility using these metrics.

I thought it would be interesting to analyze how the Mets' offense stacks up with this measure.

The graphic above lists those Met hitters that have at least 50 plate appearances so far this year. I've also included a number of reference players to give you a sense of how the Mets' players stack up relative to the rest of the league. The number if parentheses indicates the percentile that each player's Volatility score falls in.

Keep in mind, this is predicted Volatility based on the four metrics above, not actual Volatility (although the average difference between actual and predicted is 9%, so not too shabby).

Jose Reyes has not only been ungodly in terms of his raw value this year, but he's also the second least volatile performer day in, day out. Essentially, the data proves out what we've all seen this year--that Reyes has produced on a very consistent basis and in many cases has carried the Mets offense daily.

Carlos Beltran has also been very consistent, coming in at the 95th percentile. Beltran has actually been a highly consistent hitter since 2007. He finished in the top-10 in 2007 and 2008 by this measure.

The "what could have been" part of this post centers on Ike Davis. Not only was Davis having a tremendous year offensively, but he was contributing on a high level with very little variability over stretches (93rd percentile for Volatility). That's saying a lot given that Ike's OPS was .925 and a wOBA of .394.

Beyond confirming suspicions as to whether certain players have been "streakier" than others this year, there aren't too many conclusions to draw about the Mets lineup from this analysis. Whether or not a low Volatility line-up in general is preferable is unclear. My gut (yeah, I said it) tells me yes, but I also think it will depend on the general quality of your lineup and how good a team is at run prevention.