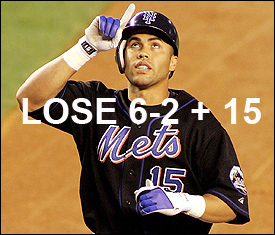 The Mets and Cardinals rushed through a game on a brutal afternoon in front of a crowd largely comprised of campers more interested in Carvel than Carlos Beltran. Jon Niese gave up a long double to the second batter he faced, Jon Jay, then gave up an even longer home run to Albert Pujols when he unwisely hung a slider right over the heart of the plate. El Hombre belted it off the second deck in left field for a two-run bomb, and for a guy routinely complimented for his humility, he certainly admired its trajectory for quite a while. (Particularly since the Cardinals made noise about disliking Angel Pagan's reaction to his walkoff home run last night.)

The Mets were held off the basepaths for the first three innings by Jake Westbook, who they thrashed completely the previous time they saw him in Cleveland last season. In the bottom of the fourth, Jose Reyes did Not Tonight, Boss duties with a drive to center field that went over Jay's head, then bounced back toward the infield, giving him an easy triple. Justin Turner followed with an RBI groundout to cut the Cards' lead in half.

Niese settled in after his rough first, but he and the defense behind him faltered in the top of the fifth. First, Niese gave up a one-out double to the number eight hitter, Daniel Descalso, then walked Westbrook. Then, a Lucas Duda throwing error allowed Descalso to score from second, and a doozy of a throw from Angel Pagan on a single from Jay allowed two more runs to score, giving the Cards a 5-1 lead.

Things were mostly quiet the rest of the way, as neither side showed much interest in extending this game longer than necessary. Westbrook cruised through eight innings, while Niese and DJ Carrasco combined to keep things where they were in the sixth, seventh, and eighth. The Mets scraped out another run on a Duda double and a Jason Pridie single in the bottom of the eighth, but the Cards managed a two-out rally against Manny Acosta in the top of the ninth to extend their lead to grand slam distance.

The Mets went quietly in the bottom half, save for a Justin Turner single and what could be Carlos Beltran's last at bat as a Met at CitiField. He received a surprisingly warm ovation (surprising in the sense that anyone in the crowd realized the significance), but could not manage the heroics he had last night, or so many times in his Met career, as he flew out to right.

Beltran deserved better, today and for most of his time in Queens. Let's hope whatever fans get to enjoy him next realize what they have far more than most Mets fans ever did. Unless, god forbid, they're Braves or Phillies fans. 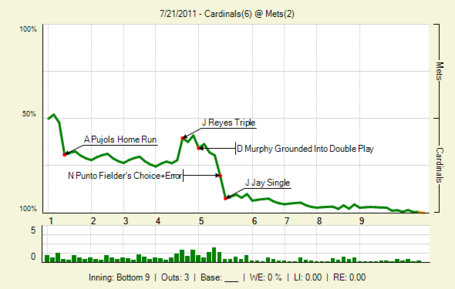