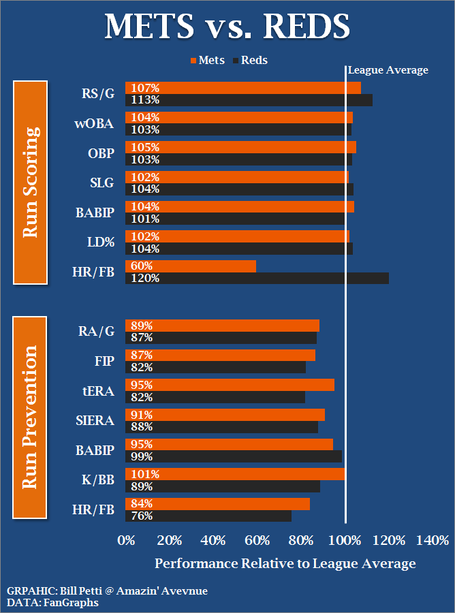 These teams sport the same record, but the Reds have a better run differential largely due to their scoring about a fifth more runs per game. As is typical, the Reds have hit a bunch more home runs than the Mets (110 vs. 66). Unfortunately for this series, the Reds HR/FB ratio at home is 3rd best in the NL (12.8%) and the Mets are league-worst in terms of giving up HR/FB (12.6%).

The Mets pitching looks to be slightly better on the year than the Reds' staff, and so far in July that's held. It's not a huge gap, but when their HR/FB ratio is as bad as it is and they are facing a slugging team on the road you have to dig deep.

The Reds 12.7% HR/FB ratio against at home may bode well for Met hitter, especially with the return of David Wright and Carlos Beltran still in a Met uniform. The real question will be whether the pitching staff can find some way to limit the Reds' home runs. So far this year, they simply haven't found a way to do that in hitter-friendly parks.

I'd say we are looking at a split at best.

For more on the Reds, be sure to check out Red Reporter.