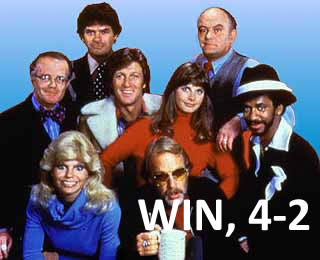 That was going to be my headline no matter what happened in this game. Tell me you'd have done differently and I'll call you a liar.

Everyone's favorite knuckleballer took the mound tonight for the Mets. He is so fearsome a pitcher that, for the second time in a week, his mere presence caused an opposing manager to give a former MVP the night off. In this case, it was Joey Votto. You may recall Tony LaRussa sitting Albert Pujols against Dickey last Wednesday. Supposedly, a knuckleballer can "mess up" batter's timing, though both Votto and Pujols are kind of great hitters who presumably should be able to deal with such hardships better than most. I don't recall any other instances of certain hitters resting against Dickey, or any other knuckleballers, for that matter. Are there guys who regularly beg off against Tim Wakefield? If so, please enlighten me.

Then again, for a good portion of the game, it looked as if no one wanted to hit against Dickey. Through the first five innings, he scattered five hits, struck out six Reds, spent only 57 pitches in the effort, and did not even lodge a three-ball count, despite a few defensive miscues behind him. It was, if not Greg Maddux-like, then at least Rick Reed-esque A two-out double by Jay Bruce in the first inning went for nought, as did a leadoff single by Paul Janish in the third. Fred Lewis reached safely with one out in the fourth when Josh Thole let strike three escape him, but was soon erased when he was caught stealing. In the fifth,

Things first looked dicey when Dickey allowed a one-out single to Todd Frazier and a grounder to Janish that just eluded David Wright's glove. (Ruled a single, though definitely a ball that Wright should have fielded and turned into a fielder's choice, at least.) He got some assistance from Dusty Baker, who asked pitcher Mike Leake--regarded as one of the better hitting catchers in the NL--to give up an out with a sacrifice bunt. Dickey helped himself out by catching Drew Stubbs looking on a hard knuckler.

Unfortunately, Mike Leake was just as good through the first six, if not quite as efficient. He gave up a leadoff double to Daniel Murphy in the second, then benefited from Murphy trying to advance to third on a grounder back to the mound. (Not the last curious play for Murph this evening.) The Mets managed to get two men on in the fourth and sixth innings as well, but each time it came with two outs, and each time they could not manage a big hit.

The Reds finally got to Dickey in the bottom of the sixth when old friend Miguel Cairo led off with a single. After a strikeout of Bruce, Brandon Phillips belted a ball to deep center field that barely missed going out of the park. Carlos Beltran fielded it quickly and cleanly, but it was still deep enough to allow Cairo to score all the way from first. After a walk to Lewis, Dickey escaped further damaged with a groundball from Ramon Hernandez that went for a double play, despite a hard takeout slide that leveled Turner at second.

But right after Dickey faltered, so did Leake. Reyes (who else?) started things off with a one-out single, then went to third on a bloop single from Turner (after Turner hit what might have been an extra base hit in the right-field corner but was ruled a foul ball). Leake had logged 112 pitches to this point, so Baker opted to bring in the lefty Bill Bray to turn around Carlos Beltran, but he still managed to lift a ball far enough to left field for a game-tying sac fly.

Baker then channeled his inner LaRussa and made another pitching change, bringing in righty Logan Ondrusek to face Wright. The move backfired and then some, as Wright singled, followed by a Murphy double ripped down the right field line that scored both Turner and Wright. Ondrusek was also unlucky enough to give up the first double to Jason Bay since the Woodrow Wilson administration, which scored Murphy and gave the Mets a 4-1 lead.

Dickey still had a reasonable pitch count at this point and came out to pitch the bottom of the seventh. He allowed a one-out double to Janish (playing the role of Emilio Bonifacio in this edition of Mets Theater), and after a groundout from new catcher Ryan Hanigan, gave up a single to shallow center to Stubbs. Jason Pridie may have had a chance to throw out Janish at home, but Murphy inexplicably cut off his throw, allowing the run to score.The Mets' radio guys were adamant this was a terrible play, while Keith Hernandez, somewhat uncharacteristically, defended the decision. People at home, what do you think?

In any event, the score was now 4-2, and Dickey was removed in favor of Pedro Beato, who had yet another rough outing. First, Stubbs "stole" second base behind him. (Turner clearly laid a tag on Stubbs before he reached the bag, but umpire Wally Bell, standing behind the play for some reason, called him safe.) Rattled, Beato walked Cairo on four pitches to bring the dangerous Bruce to the plate as the go-ahead run.

Terry Collins called on Tim Byrdak to get the big lefty. Byrdak, you may recall, gave up a walkoff home run to Bruce last fall in the game that clinched the Central Division for the Reds. And if you didn't recall that, Gary Cohen was more than happy to remind you. I don't know if a game in late July can make up for that humiliation, but Byrdak tried his best by fanning Bruce on three pitches to end the inning.

After the Mets went quietly in the top of the eighth, Bobby Parnell came on a day after handing a win to the Marlins. He issued a one-out walk to Lewis, despite being ahead of him 0-2 at one point in the at bat, and despite the fact that ball four sure looked like strike three to me. That brought up Joey Votto to pinch hit as the tying run, and you would be excused for assuming the next words I'm about to type are "game-tying bomb." Instead, Votto flew out to left for out number two. (A fly from Votto to Bay can't be the first Canadian-to-Canadian out ever, but I can't think of any others.) One groundball later, Parnell had a scoreless inning under his belt. Stranger things have happened.

The Mets bypassed a chance to expand their lead in the top of the ninth, which gave Jason Isringhausen a chance for his 296th career save in the bottom half. He'd have to pass through quite a gauntlet to get it, though. Janish was finally retired when he hit a sharp grounder off of Murphy's glove. Murphy somehow scooped up the ball and dove for the bag, just beating Janish. ("He's very entertaining, isn't he?" quipped Gary Cohen.)

Wright was not so lucky, as a Hanigan grounder clanked off his glove for his first official error of the game. Izzy struck out Stubbs on a low breaking ball to bring the Reds down to their final out, but Cairo followed with a chopper over Wright's head (nothing he could do about this one). That not only extended the inning further, but also meant Bruce would get another turn at bat, again representing the winning run.

Clearly worried about throwing fastball to Bruce, or anything near the strike zone, Izzy walked him to load the bases, put the winning run on, and give a chance to Phillips--not the home run threat Bruce is, but no slouch either. And at Great American Ball Park, almost anyone is a home run threat. But after struggling all inning, the crafty vet made Phillips look bad on his first two pitches, then K'ed him on a nasty curveball to finally bring the game to an end.

What looked at first like a taut pitcher's duel almost became a rout, then turned into a far-too-interesting nail biter. It wasn't the prettiest win in the world. But hey, what did you expect from a Dickey-Leake matchup? 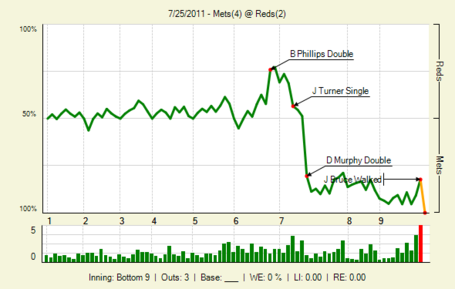 Nice job by MetsFan4Decades; their effort in the game thread embiggens us all.