Mets 8, Nationals 5: Bullpen Holds On to Big Lead After Mets Slap Around Wang

Share All sharing options for: Mets 8, Nationals 5: Bullpen Holds On to Big Lead After Mets Slap Around Wang 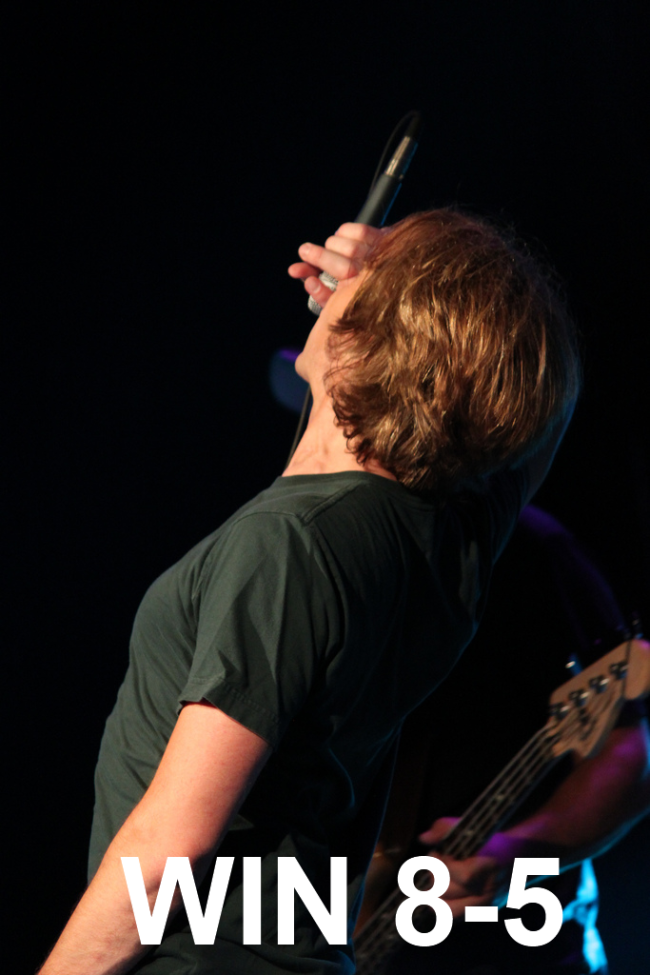 You didn't think it was going to be that easy, did you? It's a good thing the Mets, who entered the game ranked third in the National League in runs per game, know how to score.

The Mets took an early lead tonight against Chien-Ming Wang, who clearly is not back to being himself in his comeback from the same type of shoulder surgery that was performed on Johan Santana last year. Wang couldn't hit the strike zone when the game began, and it didn't take long to come back to bite him. Jose Reyes walked, Justin Turner singled, and the red-hot Irish Hammer, also known as Daniel Murphy, singled to plate Reyes. That was only the beginning of the scoring in the first.

David Wright hit a long fly ball to right-center field that would have easily been a double, but Turner was tagging up on a ball that everyone else on the field appeared to realize was easily going to be a hit. So the bases were loaded, and Angel Pagan singled to left to score Turner, who again opted to tag up, blocking Murphy from coming around to score on the play. With the bases still loaded, Jason Bay "drove in a run" on a weak ground out to shortstop, at which time the Mets had a 3-0 lead. Lucas Duda followed with a sacrifice fly to score Wright, and Pagan took Turner's baserunning style to the opposite extreme as he got caught between second and third and was easily run down to end the inning. Still, the Mets had a four run lead, which is not too shabby for any first inning.

Not a whole lot happened for the next couple of innings as Wang settled in while Dillon Gee retired the Nationals with ease through the first three innings. The Mets scored another pair of runs in the top of the fourth, though, which would be Wang's last inning of work.

Bay singled, and Duda reached on a routine ground ball that could have so easily been an out but instead looked like a play the Cincinnati Reds would make in the field. The laughable defense continued on Ronny Paulino's single to right-center that was botched by Jayson Werth after it landed, but Rick Ankiel picked it up and threw to the plate, where Bay was dead meat. That didn't stop the Mets from scoring, as Gee singled to bring Duda home and Reyes hit a rope to left field that resulted in a sacrifice fly that plated Paulino.

In the bottom of the inning, Gee loaded the bases with one out on a pair of hits and a hit-by-pitch, something he's done fairly frequently this year. He got the grounder he needed to end the inning, but Reyes' relay throw to first for the double play sailed way wide of the Irish Hammer's glove, allowing the runners on second and third to score. Gee struck out Ian Desmond to end the inning without further issue.

The Nationals drew within three runs of the Mets in the fifth inning, beginning with a double off the bat of Wilson Ramos, who moved to third on a ground out by former Omar Minaya Vesting Option Special Alex Cora. Ankiel hit a sac fly to score Ramos, and Gee once again got a strikeout to end the inning.

In the sixth, the Mets answered with another pair of runs. Bay doubled, and one Duda out later, Paulino doubled, too, to score the seventh run of the game. After Gee struck out, Reyes "doubled" on a soft fly ball to no man's land between second base and center field, and Paulino scored. That was the end of the Mets' scoring on the evening, and it almost wasn't enough.

With two outs and nobody on base in the bottom of the sixth, Gee again loaded the bases with Nats, but Ramos' line drive to center field was hit almost directly at Pagan, who almost managed to not catch the ball.

Figuring he hadn't gotten into and out of enough jams yet in the game, Gee hit Cora with a pitch to begin the bottom of the seventh. Two ground outs later, Gee walked Ryan Zimmerman, but Ryota Igarashi came into the game and bailed him out by retiring Michael Morse on a fly ball. When it was all over with, Gee had thrown 6.2 innings, struck out five, walked four, and allowed three runs, two of which were earned.

Then came the rest of the Mets' bullpen, who must have been watching Gee put runners on base at an alarming rate. Bobby Parnell struck out Werth for the first out of the eighth inning but then allowed consecutive singles to Laynce Nix, Jerry Hairston, and Ramos, the last of which scored a run to get the Nationals within four.

Tim Byrdak was called upon to face Jesus Flores, former Mets' minor leaguer, who promptly singled to yet again load the bases. Ankiel then singled to make it 8-5. D.J. Carrasco, who's struggled all year, then became the unlikely hero out of the bullpen by striking out Danny Espinosa and Zimmerman with the bases loaded to end what looked like an inning of doom.

At long last, Jason Isringhausen came into the game to pitch the ninth and retired the Nationals in order to preserve the victory. The Mets have now won five games in a row and sit four games above .500, their highest mark of the season.

The series continues tomorrow at 7:05 pm with R.A. Dickey on the mound for the Mets and Jason Marquis getting the start for the Nationals.

Unintentionally sexual quote of the game: "[Wang] yanked it a little too hard." - Gary Cohen 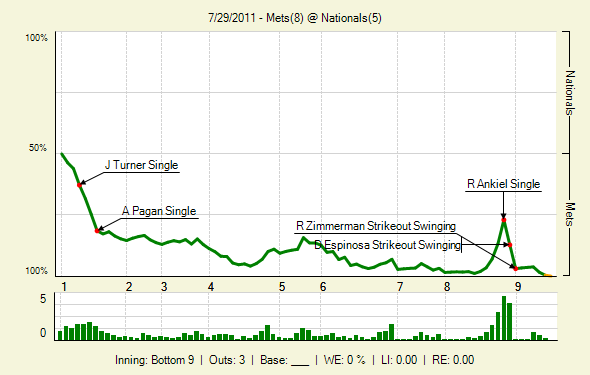