Share All sharing options for: A One Dog Night at the 1996 All-Star Game

Lance Johnson came thisclose to missing his chance to step in the national spotlight for the Mets.

One Dog -- whose nickname acknowledged his jersey number and his dogged pursuit of a lofty stolen base total -- arrived in Flushing after spending the better part of eight seasons anchoring a White Sox outfield that saw its postseason progress snuffed out by the baseball strike in 1994. Interleague play had not yet come into existence and Johnson had never made an All-Star roster, meaning a lot of Mets fans recovering from The Worst Team Money Could Buy and relying on the archaic stats listed in the local paper simply didn't know what to make of their newest acquisition.

And yet, there was the 32-year-old outfielder leading the league with 121 hits, 13 triples, and 28 stolen bases at the break and in the midst of a Mets cameo for the ages. An All-Star selection seemed inevitable for the player that NY Daily News writer John Harper described as a Lenny Dykstra-Mookie Wilson hybrid, as did the accolades that would follow accordingly.

It just took an injury, a depth issue, and a little faith from a hated rival to give One Dog his day.

Baseball fans failed to select Johnson for the NL squad in favor of Tony Gwynn, Barry Bonds, and Dante Bichette. NL manager Bobby Cox righted that wrong by selecting the Mets' diminutive center fielder to join the NL All-Stars at Veterans Stadium in Philadelphia as a reserve, uniting him with catcher Todd Hundley in the first multi-player contingent to represent the Mets at the midsummer classic in five years.

Cox's need for a true center fielder -- Rockies outfielder Ellis Burks was the only other candidate, but primarily played left field in 1996 -- gave the nod to Johnson over teammate Bernard GIlkey, who was in the midst of his own career season in Flushing. 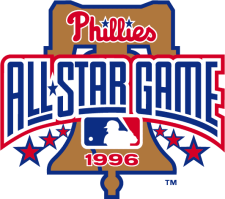 An injury to Gwynn enabled Cox to award Johnson with starting duties, making him the first Mets player to do so since Howard Johnson received the honor in 1989.

And so, there was Johnson snagging a Roberto Alomar fly ball to center field in the first inning. There he was leading off for the Senior Circuit and ripping a double to center field and later creating an early NL lead by scoring on a Bonds ground out. He followed by singling to right center field in the bottom of the fifth, stealing second base, and later getting thrown out trying to steal third. It seemed like a nice contribution for the veteran as the NL bench players started to enter the game en masse.

Then Cox assigned Burks to play left field in a double switch alongside Johnson. In the endless roster shuffle that engulfs every All-Star Game, Cox could always later bump Burks to center and end Johnson's night at any time.

The Braves skipper never did. He kept his true center fielder playing his natural position.

Johnson rewarded Cox's faith with another single in the bottom of the seventh and later capped his performance with a sparkling catch on an Albert Belle line drive in the top of the eighth. Hundley had entered the game as a substitute to Mike Piazza in that inning, giving him a nice view of Johnson's grab and giving Mets fans a view of two of their best on an All-Star field simultaneously. Jason Kendall replaced Hundley in the ninth inning, leaving only One Dog to be on the field for celebrations as the National League put the finishing touches on a 6-0 victory and claimed its third-consecutive  win over the Junior Circuit -- and last until 2010.

Of course, Johnson never had a prayer of winning the All-Star MVP honors on that night in 1996. Dodgers catcher Mike Piazza, who grew up a short hop from the Vet in nearby Norristown, homered in his first at-bat and later hit an RBI double to add to the NL's offensive efforts.

But what of the story of One Dog, the third Met to ever play all nine innings in an All-Star Game? (Keith Hernandez and Darryl Strawberry accomplished the feat in 1986 and 1988, respectively.) Johnson's performance gave baseball fans an opportunity to tip their cap at a Mets player rather than point their finger in derision.

While the duo were and are very different ballplayers at very different points in their careers, Johnson's 1996 season echoes what Jose Reyes is doing now for the Mets -- namely, everything. Setting the table. Providing the spark. Adding the swagger. Reyes has arguably had a more successful career already, but Johnson still set the bar awfully high on the single-season standard as the Mets' shortstop vies over the next few months to break the last remaining records of his club's former center fielder.

(In a strange coincidence, Reyes duplicated Johnson's line of 3-for-4 with a double and stolen base in the 2007 All-Star Game. Unfortunately, NL skipper Tony LaRussa subbed J.J. Hardy as a defensive replacement for Reyes in the top of the ninth as the National League failed to win its 11th All-Star Game in a row. So, advantage: Johnson.)

Like Jose Reyes, Johnson didn't walk as much as you'd like for a leadoff hitter. He walked only 33 times in 724 plate appearances in his career year, with eight of those coming by way of an intentional pass. That seemed apropos for the 1996 All-Star Game, which holds the distinction of being the only midsummer classic without either pitching staff allowing a walk.

The truth, though, is that Johnson didn't need to walk much in that game or in that season.

One Dog had already earned that spotlight in a goddamned rout.