*All results from games played on Saturday, July 2nd 2011 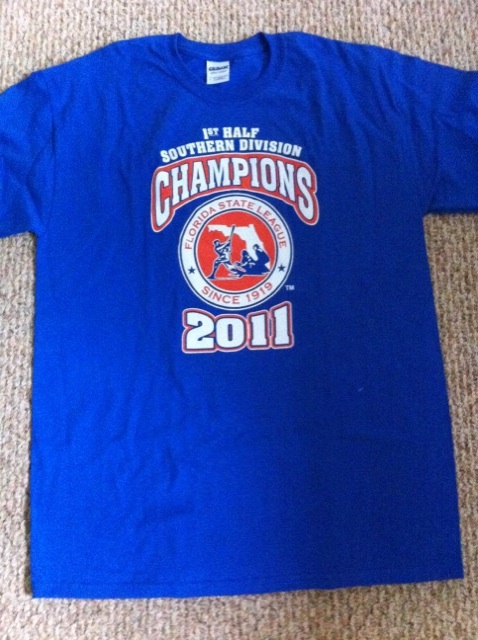 That's right, time for some swag. With all of the giveaways we do around here a giveaway in honor of the minor leagues -- the world's greatest known source of sweet giveaways -- is long overdue. What shall we be giving away you ask? You may remember some chatter in the comments section a couple weeks back about the very cool championship T-shirts (pictured) that the St. Lucie Mets wore during their on-field celebration of the FSL first half crown? Well folks, ask and you shall receive. I have come into possession of one of those very shirts. Authentic and unworn.

More importantly, how can you win it you ask? Well, starting tomorrow, we will be taking guesses at the next day's Star of the Night. Whoever guesses the correct S.O.T.N. first gets the shirt. Simple as that. If more than one person guesses it right, we'll let the computer decide. All guesses must be received in the AAProspectMailbag@gmail.com inbox by 12am each day with the subject line 'Star Prediction'. Provide your AA handle along with your guess. One guess per handle, per day. The contest will run until we have a correct prediction. And that's it. So start guessing!

SYRACUSE 6, BUFFALO 5 (11) (Box) Anytime you lose in the 11th it stings but the Bisons really can't be too upset considering they gave this game away all night in an awful four-error performance (making six errors in their last two games). Starter LHP Mark Cohoon had what was his best start in Triple-A but continued command problems had him out early and the bullpen faltered. Namely RHP Ryota Igarashi, who made a costly throwing error for the second night in a row, as part of a nightmare ninth that featured Igarashi's error, another by SS Luis Figueroa and a passed ball by C Mike Nickeas that all resulted in three runs for Syracuse to tie up the game. All in all, an ugly game that, despite some late-inning fight from the Buffalo bats, they really didn't deserve to win.

BOWIE 7, BINGHAMTON 4 (Box) Rallies in the first and ninth bookended an otherwise quiet night for the Bingo bats, who couldn't muster much against Bowie starter Tim Bascom. Pair that with an awful relief effort from RHP Erik Turgeon and the B-Mets have officially broken through the half century mark on the short side of the docket. On the bright side, SS Jordany Valdespin continued to do his best to try to keep those of us imagining a world without Reyes back from the ledge. It's not really working but hey, at least he's trying.

ST. LUCIE 4, BRADENTON 1 (Box) Not a whole bunch to say here. LHP Darin Gorski doesn't leave us much to say here anymore. He's too damn economical, working through five rain-hurried innings with nary a speed bump. I guess he did walk on the wild side a bit on Saturday, which pretty much means he had strong game by any other pitcher's standards. We can thank Cesar Puello for the lion's share of the offense, as he launched a two-run blast in the fourth. Not only is the quietly improving power a nice sign, it's much more meaningful now that I can type 'CF' next to his name every day.

SAVANNNAH 8, AUGUSTA 0 (Box) Could the Gnats have picked a better final score for their eighth consecutive victory? The answer is no, they could not. What's more, starter RHP Gonzalez Germen demonstrated the proper technique for effective tightrope walking in this one. Twice he confronted the less than pleasant bases loaded, one out scenario and both times escaped unscathed. His secret? Induction. That is, of ground balls, a skill which Germen has always possessed and found quite useful. Fans in attendance also got a rare glimpse of the 2010 version of sometimes slugger 3B Aderlin Rodriguez, LHP Chase Huchingson continued to do his best Gorski impression to put this one to bed and and that, as they say, was that.

BROOKLYN 5, STATEN ISLAND 6 (10) (Box) It was the top of the ninth and things looked promising. The Cyclones not only had a nice three-run cushion but the bases were loaded with just one out and frankly their best hitter at the dish. That's when things took a turn for the worse. 3B Brian Harrison kicked off the bad vibes with an inning-ending DP. Next, Brooklyn pseudo-closer LHP Jeremy Gould would allow the hated Yankees to close the gap and force extras. And finally RHP Hunter Carnevale -- despite his awesome name -- wilted under the pressure in the 11th, allowing a leadoff single, two wild pitches and the walkoff sac fly. That sucks.

There are a few shortcuts to obtaining the S.O.T.N. honors. Cycle. No-hitter. Pegging any rehabbing Philly. And of course, a 5-for-5 night. Therefore Brooklyn's 2B Brandon Brown gets the gold star by default as he continues his extremely hot start to the season.
Goat of the Night
Let's make it an all Brooklyn affair and hand the horns off to Cyclone's demi-closer LHP Jeremy Gould whose three runs allowed in the bottom of the ninth not only betrayed a nice start by Eduardo Aldama but even worse, forced extras where Brooklyn would ultimately fall.
Oh and one final item of note: According to BA's Ben Badler, yesterday the Mets signed IFA C Jose Garcia out of Venezuela. The 16-year old switch-hitter was ranked BA's 24th available IFA in the 2011 pool and the third ranked catcher overall. According to Badler, 'he's a 5-foot-11, 180-pound switch-hitter with a line-drive swing and good catch-and-throw skills.' Apparently he is lacking power but again, he's still just 16. Certainly not a bad move as the Mets catching situation -- pretty much throughout the org. -- is in shambles to say the least. Expect to see Garcia start his pro career in the VSL, this or next summer.