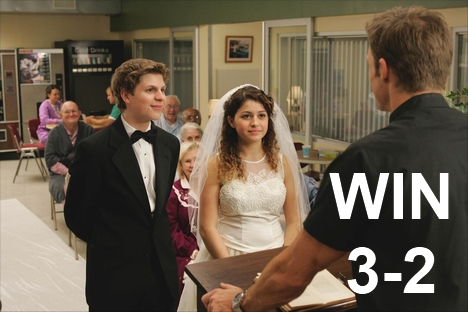 On the verge of getting swept at home by the hated Yankees, the Mets did the nearly impossible.

The game started quite well for the home team, as R.A. Dickey made the Yankees' highly powerful lineup look like a bunch of minor leaguers. There were swinging strikes all over the place in the first inning.

Then the Mets got on the board after making two outs in the bottom of the inning. Carlos Beltran doubled, and Daniel Murphy single to left to bring home Beltran despite a pretty darn good throw by Brett Gardner. His arm would play a role later in the game.

The Mets didn't hit much for a while after that, but Dickey looked like one run was all he would need. He carried a no-hitter into the fifth inning before Robinson Cano hit a leadoff double. Nick Swisher quickly followed with a single, and the Yankees had tied the game.

After a fly out, Dickey got a ground ball that should have netted an out - and probably a double play - that Justin Turner tried to flip to Ruben Tejada with his glove. The ball sailed over Tejada's head and extended the inning. With Freddy Garcia due up next in the Yankees' order, Turner would have been well served to settle for one out if he had any second thoughts about where to go with the ball.

Garcia sacrificed both runners over, and Dickey loaded the bases on a walk to Gardner before running the count full on Curtis Granderson. Luckily, Dickey got Granderson to ground out to second base to escape the inning without furhter damage.

The fifth was unexpectedly Dickey's last inning of the game because of tightness in his left glut. So, yes, Dickey hurt his butt.

The Mets' bullpen then turned in a mostly excellent performance. Pedro Beato threw two scoreless innings, but Jason Isringhausen entered the still-tied game in the eighth.

Gardner tripled to start the inning after Izzy had fallen behind him in the count. Granderson hit a sacrifice fly to right to plate Gardner and give the Yankees their first lead of the game. Two more Yankees reached base, but Isringhausen didn't allow them to score.

David Robertson was summoned by Joe Girardi, and although he issued two walks with two outs, he struck out Turner looking to end the eighth. The Mets' hopes looked gloomy at best.

Francisco Rodriguez kept the Yankees off the board in the top of the ninth, and Mariano Rivera retired Beltran and Murphy with ease to begin the bottom of the inning.

Then the usually-impossible stuff started to happen. Jason Bay worked a walk, and Lucas Duda singled to advance Bay to third base. Terry Collins sent Ronny Paulino to the plate to pinch hit for Josh Thole, and Rivera quickly got ahead 0-2 in the count. With a gaping hope on the right side of the infield, however, Paulino drilled a single through the right side to tie the game.

Ruben Tejada came to the plate next and grounded a ball that went right through Yankees' third-string shortstop Ramiro Pena for what should have been the third out of the inning. The lumbering Duda rounded third - inexplicably, given his lack of speed - and was thrown out by a mile at the plate by Brett Gardner. The game went to extra innings.

Rodriguez stayed in for another scoreless inning for the Mets, and they used Scott Hairston, last man on the bench, to pinch hit beginning the bottom of the inning. Like Bay the inning before him, Hairston drew a walk. Angel Pagan tried to bunt for a hit but was thrown out at first on a close play, and Turner was hit by a pitch.

It looked like Carlos Beltran would end the game right there, but he struck out, and it was up to Murphy. Murphy grounded to short, just like Tejada in the ninth, and Pena bobbled the ball, allowing everyone to advance safely and the inning to continue.

The Yankees made a pitching change, and it worked out very well for the Mets. Jason Bay lined a game-winning, bases-loaded single to right-center field to win the game. 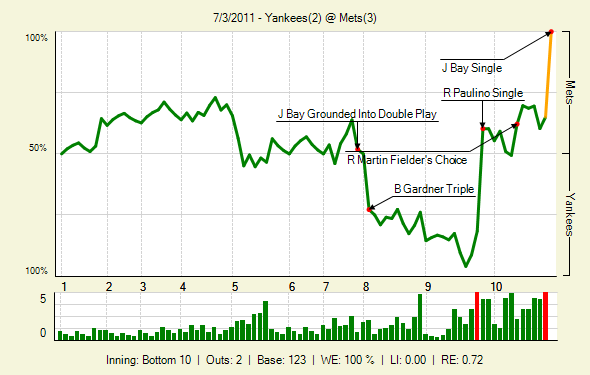